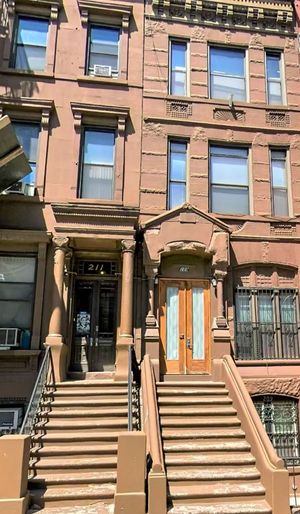 Warren Fitzgerald’s building, 211 W. 122 St. in Harlem, where the Scienceers had their first meetings.

The Scienceers was the first New York City local sf club. For many years fanhistorians have considered it the First Club ever. (The other contender, SCC/ISA is discounted because it was science- and correspondence-oriented. But see the Eastbay Club.)

The Scienceers was founded December 11, 1929, a date some consider the beginning of fandom. Its first "official" meeting was January 4, 1930. It held irregular meeting until April 26, 1930 when it reorganized and held regular weekly meetings until September 27, 1930, when it split into two factions.

It was a tight-knit local group that conducted regular meetings every week. The Scienceers claimed the same aims as the SCC, but they were more inclined to discuss science-fiction stories in their meetings, as well as in their club magazine, The Planet, edited by Allen Glasser, which came a close second to the SCC's The Comet, and published six monthly issues between June and December of 1930. (Fanhistorians who don't count the SCC as a fanclub rate The Planet as the first fanzine.)

The first president of The Scienceers, in whose home, an apartment in a brownstone at 211 W. 122nd St. in Harlem, the initial club meetings were held, was Warren Fitzgerald, then about 30. Fitzgerald may have been one of the first African Americans to participate in fandom. The other founding members, mostly Jewish teenagers, were Allen Glasser, Nathan Greenfeld, Philip Rosenblatt, Herbert Smith, Julius Unger and Louis Wentzler. The group formed as a result of their correspondence in Science Wonder Stories.

In late 1930 — probably the fateful September 27th, mentioned above — Hugo Gernsback hosted a special lecture by Wonder Stories staff and authors for the club, and some 35 club members attended. Alas, Gernsback failed to pay the rent for the meeting hall at the American Museum of Natural History, and The Scienceers were stuck with the bill. During the meeting, the editors pitched their rocketry club, which Fitzgerald joined, dropping out of The Scienceers and leaving them to find a new meeting site.

The resulting furor — the first fan feud — split the club into two factions, both calling themselves "The Scienceers," a state that continued for nearly two years; the members had reunited by the start of 1933, but as an organization, the club had died on September 27, 1930, and the remnants fizzled out as its teen-aged members grew up and went on to other things.

In June 2021, Leah Zeldes Smith came across the above passage and challenged the Facebook Fanhistory group with “a quest for intrepid New York fanhistorians.” Jonathan Baker answered the call — finding the spot less physically but more accurately than Sykora. Staring with a 1925 topological map, Baker then consulted a 1912 Bergen County atlas, plotted the future site of the bridge and, finally, turned to Google Earth to get a satellite picture.