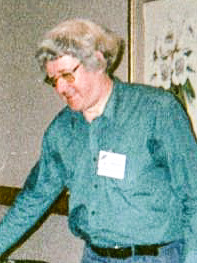 David Langford is a British fan, writer, editor and critic who publishes the newszine Ansible (1979–1987, 1991–current).

By training he is a physicist and his first job was as a weapons physicist at the Atomic Weapons Research Establishment at Aldermaston, Berkshire, which formed the basis of his hilarious novel The Leaky Establishment (1984).

Langford is active in British fandom (member Oxford University Speculative Fiction Group, BSFA). He has worked on the convention committees or in publications of Eastercons (Skycon, editor of Helicon's daily newsletter Heliograph and Sou'Wester's The Adelphi Coracle), Faancon 6, Mexicon 5 (daily newsletter Cactus Times editor), Novacon 7 and British Worldcons including Conspiracy '87, the 1987 Worldcon where he had been on the bid committee and where he was Fan GoH.

He was the first British co-administrator of GUFF (1978–80). He was TAFF winner in 1980, traveling to Noreascon Two and writing The Transatlantic Hearing Aid (1985) as his trip report. The Auld Lang Fund was organized to bring him to Aussiecon 3 (1999). He won the 2002 Skylark Award.

But it is as a fan writer that he excels, having received 21 Best Fan Writer Hugos, a record for anyone in any category, with a continuous streak of thirty-one Hugo nominations (between 1979–2009, see Best Fan Writer Hugo Category). His monthly newszine Ansible has also received five Hugo Awards (see Best Fanzine Hugo Category for details) and sixth as semiprozine. He won several other "lesser" awards, and his fan writing has been collected in several fanthologies and books, see below.

As a pro, Langford is noted for his parodies, including two novels in collaboration with John Grant (Paul Barnett): Earthdoom! (1987) and Guts (2001), parodying respectively the disaster and horror genres. Shorter parodies and pastiches are collected in He Do the Time Police in Different Voices (Wildside Press, 2003). His first science fiction novel was The Space Eater (1982); he has published several dozen pieces of short SF between 1975 and 2011, winning the Best Short Story Hugo for "Different Kinds of Darkness" (F&SF January 2000). He proofread the second edition of The Encyclopedia of Science Fiction (1993), is a principal editor of and major contributor to the third, online edition (for which he shared another Hugo Award; the same website is technically the fourth edition since a change of publisher in October 2021) and was a contributing editor of The Encyclopedia of Fantasy (1997). He has written numerous book reviews, collected in (among others) The Complete Critical Assembly (2002), Up Through an Empty House of Stars: Reviews and Essays 1980-2002 (2002), Starcombing: columns, essays, reviews and more (2009) and Short Shrift: A Big Book of Little Reviews (2017).

He runs the small press Ansible Editions, publishing both fan and pro material; the fan publications include a number of free ebooks downloadable from the TAFF website, which he maintains; several – such as A Vince Clarke Treasury (2015) and the Terry Carr collection Fandom Harvest II (2019) – newly compiled by Langford himself for this site. Several other Ansible Editions titles are fanhistorical compilations and references by Rob Hansen.

Edited collections of fan writing by others (Ansible Editions unless noted otherwise):