The Doc Weir Award is voted on by the attending membership of Eastercon and awarded at the convention. The Doc Weir Award was set up in 1963 in memory of fan Arthur "Doc" Weir who had died two years previously. He was a relative newcomer to fandom (he only discovered it in his 60s) but in the short time of his involvement he was active in a number of fannish areas. In recognition of this, the Award is sometimes seen as the "Good Guy" Award; something for "The Unsung Heroes". 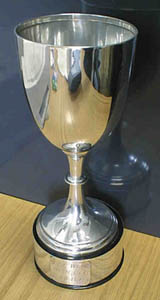