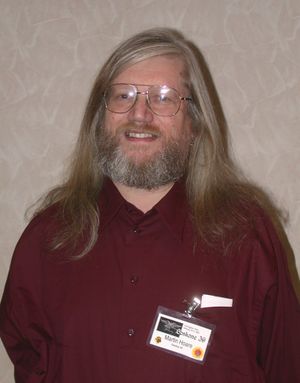 Martin Hoare was a British con-running fan (and part-time mad scientist) who was perhaps best known as the perennial Hugo Award acceptor for David Langford. (When he accepted Langford's Best Fanwriter Hugo at Chicon 2000, he promised that an sf blockbuster based on "The Collected Hugo Acceptance Speeches of Dave Langford" was already in production as a movie.) Professionally, he was a physicist turned software developer with a consuming passion for great beer.

He co-chaired Seacon '84 and Helicon 2, the 1984 and 2002 Eastercons. He worked on innumerable convention committees (probably holding the record for most Eastercon committees) including acting as Division Head at ConFiction. A keen European congoer, his real-ale bars at Eastercons were a wonder to consume. (He also dabbled in fireworks.)

A British con-runner said of him,