The 58th Worldcon, and sixth in Chicago, was held August 31 to September 4, 2000, at the Hyatt Regency Chicago, the Fairmont Hotel, and the Swissôtel in Chicago, Ill. GoHs: Ben Bova (author), Bob Eggleton (artist), and Jim Baen (editor). FGoHs: Bob & Anne Passovoy. Harry Turtledove was Toastmaster. It was sponsored by ISFIC and chaired by Tom Veal.

The convention's official name, Chicon 2000, puzzled some fans who wondered how they had missed Chicons 6 through 1999. (They were even more confused when Chicon 2000 was followed by Chicon 7.) As happened with the TASFiC, “fen wouldn’t have it,” and the con is mainly remembered as Chicon 6.

The Worldcon had 6,574 members, of whom 5,794 actually attended the convention.

Chicon programming included a series of online chats sponsored through Cybling, which allowed non-attendees to interact with the program participants. The 2000 Hugo Awards were held.

Linked exhibits and programming called “Planet Chicago” focused on local fandom and sf history and included such things as coverage, coordinated by Neil Rest, of the historic real-world “terraforming” of the city of Chicago, such as adding to its landmass, raising the city’s elevation and reversing the flow of the Chicago River. 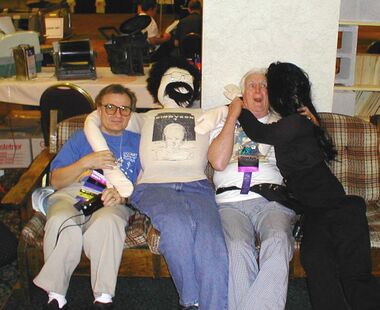 Roger Sims, left, and Dave Kyle visit the soft sculptures in the Fan Lounge. Note the ditto machine, mimeo and letterpress behind them.
Photo by Laurie Mann.

A centerpiece of the con was the Fan Lounge, designed by Dick and Leah Smith[1] to resemble a typical Chifan living room of the Thursday era, complete with ratty furniture, real brick-and-board bookcases stuffed with sf, and life-sized soft-sculpture replicas of Thursday regulars Phyllis Eisenstein and Neil Rest (created by Gretchen Roper), along with fanzine displays and repro equipment.

At the con, 106 program items had audio recordings made and were available for sale. Program Division Director Steven H Silver has a complete collection and Chicon 2000 also donated a complete set to SFOHA at Smofcon 18.

The Worldcon arose from the Chicago in 2000 bid and hosted the 2003 Worldcon Site Selection. During the bidding process, Chicago in 2000 issued 40 trading cards depicting a variety of science fiction authors and artists, including Gordon R. Dickson, Terry Pratchett, and Larry Niven. Any one who collected 20 of the cards and voted in site selection received a free membership conversion to Chicon 2000. When Chicago in 2000 won, they issued a trading card #0 that announced their Guests of Honor.