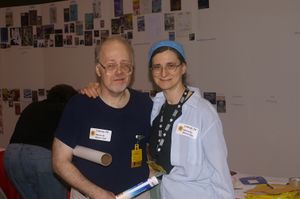 Phyllis Eisenstein (née Phyllis Leah Kleinstein), a Chicago fan, author of science fiction and fantasy short stories and novels, academic and sf art collector, was a frequent congoer and a regular at Thursday. A full-size soft-sculpture replica of her by Gretchen Roper featured in the Thursday analogue Fan Lounge at Chicon 6.

Her work was nominated for multiple Hugo Awards and Nebula Awards. She published six novels and more than forty shorter works of varying lengths in the genres of science fiction, fantasy, and horror fiction. Her stories appeared in both anthologies and in every major science fiction and fantasy magazine; these include The Magazine of Fantasy and Science Fiction, Analog, Galaxy Science Fiction, Isaac Asimov's Science Fiction Magazine, Amazing Stories, Weird Tales, and others.

She was born in Chicago, Illinois, and lived there most of her life. While attending college at the University of Chicago, Eisenstein, with her close friend Lynne Aronson, went to George Price’s weekly gathering of Chicago's science fiction fandom. There, she met her future husband, Alex Eisenstein. In 1966, shortly after attending Tricon, they were married. She was involved with early Windycons and helped with the Chicago-area SFRA Conferences.

Famously, George R. R. Martin credited her with convincing him to add dragons to A Song of Ice and Fire, dedicating Storm of Swords, “for Phyllis who made me put the dragons in.”

Eisenstein’s first two science fiction stories were published in 1971, the first in collaboration with her husband, Alex. After establishing herself as a professional writer, she returned to college and finished her education, earning a 1981 B.A. degree in anthropology from the University of Illinois.

Eisenstein spent much of her adult life teaching writing; this began by assisting author Roger Zelazny at the Indiana University Writers Conference in 1977. She taught writing at Clarion at Michigan State University, Oakton Community College of Skokie, Illinois, and the Writer's Digest School. For twenty years, she was a member of the part-time faculty of Columbia College Chicago, teaching courses in general science fiction, popular fiction writing, fantasy, and advanced science fiction writing. In 1999, Eisenstein received an "Excellence in Teaching" Award from this institution; in 2009, she retired from CCC to devote more time to her professional writing career. Additionally, she worked full-time for many years as a proofreader for advertising agencies.

As a child, Phyllis was sent to Labor Zionist schools and learned fluent Yiddish. Her parents owned a grocery store, at which she and her brother worked after school. Her skills with butcher knives were sought after by hosts of Chicago fan parties.

Eisenstein coauthored, with Samuel M. Scheiner, a nonfiction book, Overcoming the Pain and Inflammation of Arthritis, about rheumatoid arthritis, with which she was diagnosed as a young woman.

In late 2019, she fell into a coma due to brain bleeding and never recovered.