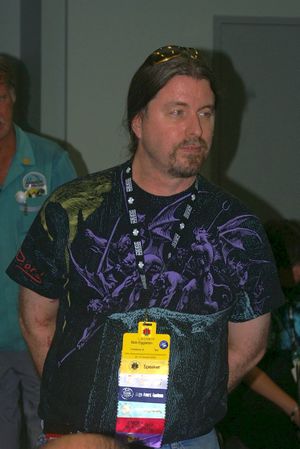 Eggleton's drawing and paintings cover a wide range of science fiction, fantasy, and horror topics, depicting space ships, alien worlds and inhabitants, dragons, vampires, and other fantasy creatures. His view on space ships were that they should look organic, and claimed that as a child, he was disappointed with the space shuttles and rockets NASA produced; they were nothing like fantasy artists of the twenties and thirties had promised. His fascination with dragons originated with his childhood interest of dinosaurs, which can be seen in the book Greetings From Earth. His paintings are commissioned and bought at science fiction conventions, and used as book covers.

Eggleton has illustrated cards for the Magic: The Gathering collectible card game.

Eggleton received massive encouragement from his father, in the form of books, supplies, visits to museums of space and aeronautics and support during the career choices he made. Eggleton dropped out of his art college, because he felt it was not for him.

Eggleton is a fan of Godzilla and worked as a creative consultant on the American remake. While in Japan he appeared as an extra in one of the more recent films.

Eggleton has frequently worked on fannish projects, providing cover arts for NESFA Press and ISFiC Press as well as a cover for the fanzine Argentus.

Awards, Honors and GoHships: Eggleton has been honored with the Hugo Award for Best Professional Artist eight times, first winning in 1994 when he famously flew to Winnipeg the morning after the Hugos were announced to accept in person. He has served for many years as one of the Gaughan Award judges.