(Did you mean a Canadian fan?) 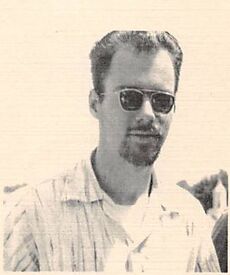 He was FGoH at Aussiecon Two. (He had been Fan GoH at St. Louiscon, but withdrew to dramatize the TAFF winner, Eddie Jones, who became the FGoH.)

He became an influential fan in the 1950s in the NY and Washington, DC, areas and co-chaired the 1967 Worldcon, NyCon 3, with Dave Van Arnam.

In the 1960s, he lived in an apartment in Manhattan and worked at a Greenwich Village mimeo shop that he called Towner Hall (after Francis Towner Laney but mundanely named "Metropolitan Mimeo"), the home of many fanzines and, for a time, the Fanoclasts. He can be as acerbic as its namesake. In 1960, Joy Clarke wrote of him, “You know TEW -- the biggest foot-in-mouth expert either side of the Pond.” To this day, he remains a stalwart of fannish fandom.

He raised fanzine production almost to an art form, in terms of effective use of illustrations, color mimeography, and ornate formatting usually found in slick newsstand magazines.

He was one of the founders of the Fanoclasts, a Balcony Insurgent at NyCon II (making his leadership of NyCon3 nicely ironic), and organized FanHistoriCon 9. He created a publishing house named QWERTYUIOPress; its ASDFGHJKLibrary “division” published The BNF of Iz.

He followed the old fannish custom of naming cars, with a series of vehicles named Weiss Rak.

He chaired Lunacon 11, Lunacon 12 and Lunacon 13. He has long been a mainstay of Corflu and was on the committee of Corflu 3, and Corflu 24. He has been a member of WSFA (including President), the late 1950s Futurians, and the Lunarians. He hosts the Falls Church Second Friday group.

He has been a columnist on Algol, Yandro and Psychotic'/SF Review.

He did two hoax issues of Fanac with Calvin Demmon. He was a member of The Cult (a charter member), IPSO, CRAP, APEX, APA-L, TAPS, and APA-F. Arnie Katz published The Ted White Sampler, a collection of his fan writing.

He was assistant editor at F&SF from 1963 to 1968, and then edited Amazing Stories and Fantastic until 1979. As editor of Amazing Stories, he reinstated the letter column and ran some fanzine reviews and other fan features. Under his editorship, Amazing and Fantastic received three Best Professional Magazine nominations in 1971 and 1972.

In addition to books and stories written under his own name, he has also co-authored novels with Dave van Arnam as Ron Archer, and with Terry Carr as Norman Edwards. He received a Nebula nomination for one of his stories. He was a member of the Guilford Gafia.