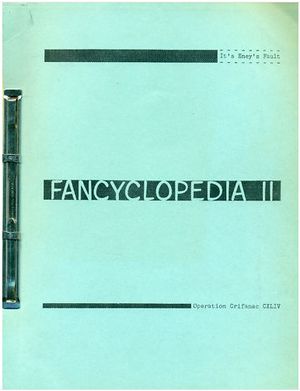 The entire contents of Fancy 2 has been added to Fancyclopedia 3, and the pages are categorized as Category:fancy2.

The complete supplement has been added to Fancy 3, and is online here.

This may be two publications:

First, a 25-page, 1960 apazine for OMPA listing material material from Fancy 1 which Eney proposed to leave out of Fancy 2.

And, second, a 16-page, 1962 one-shot by Eney containing entries from Fancyclopedia 1 he did leave out of Fancy 2, online here. 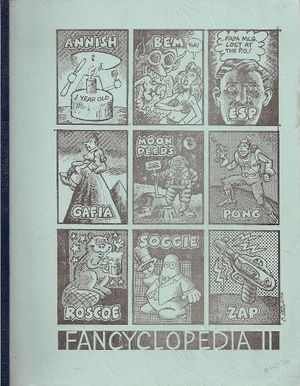 Fancy 2 was re-issued in 1978 by Mirage Press in an edition of 475 paper-bound copies. It was a photocopy of the original edition with an introduction by Jack Chalker. There was also an edition of 20 copies in hardcover.