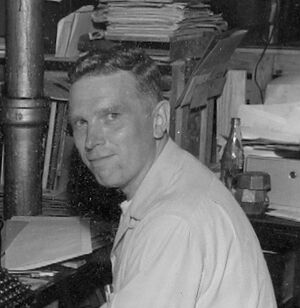 Dean Walter “Redd” Boggs, a BNF of the 1940s and ’50s, is credited with raising the standards of fan writing and fanzine production by his examples. A Minneapolis fan, Boggs moved to LA in the mid-1960s after he retired. He was a member of the Minneapolis Fantasy Society.

Some of these were collected into the Hornpipe Series. Many of his publications were done through his Gafia Press. (He also used the Neoteric publishing house.) Howard DeVore published The Craters of the Moon containing his work, and Dave Rike published Redd Boggs - Selected Works.

Boggs' main form of writing was the personal essay. He was a prominent member of N3F in the ’40s, once contributing 50-some manuscripts to the club's Manuscript Bureau. He was a close friend of Jim Harmon, and contributed articles to Harmon's fanzine RADIOHERO). He was married to fellow fan Gretchen Schwenn. He was a member of First Fandom.

See The Purple Dawn for a long article by Boggs on Spacewarp.

He used the penname Theophillis Alvor.