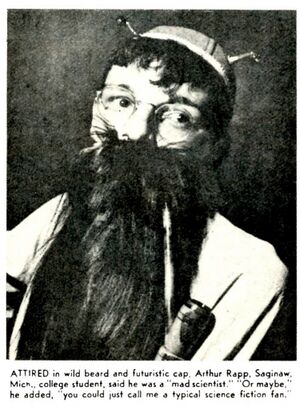 Arthur H. Rapp, a prominent fan in the 1940s and ’50s, belonged to N3F, FAPA, SAPS (twice OE), YF, Misfits and the First Fandom club. He published several one-shots and fanzines including Spacewarp which was the focal point fanzine of Fifth Fandom. (Spacewarp later merged with Ray Nelson's Universe.) He published Mindwarp, Nebula, and The Michifan.

Immediately after, Rapp quit MSFS but didn't end Spacewarp until the next year, when he left the U.S. for military duty in Korea. Rapp turned Spacewarp over to F. Towner Laney and Charles Burbee for two issues while he served in Korea. During 1950-1952, he was one of the co-editors of The National Fantasy Fan in 1951–1952 and was president of the N3F in 1962.

Rapp married Nancy Share, another prominent fan, in 1961, and they moved to Bloomsburg, Pennsylvania, where he lived until his death. They co-edited Churn.

In 1983, Rapp resumed publishing Spacewarp as a member of SAPS. The hundredth issue of Spacewarp appeared in 1992, and the last issue (#204) in the late ’90s. He also published The Gripes of Rapp for SAPS.