From Fancyclopedia 3
(Redirected from User:Leah Zeldes Smith)
Jump to navigation Jump to search 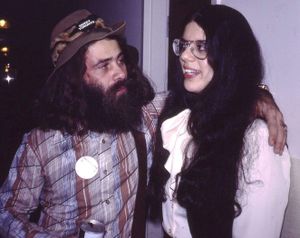 In the 1990s, she edited STET, a thrice Hugo-nominated fanzine, mimeographed by her husband, Dick Smith. She has produced a variety of other zines, including several clubzines, numerous convention progress reports and program books, innumerable apazines and, with Larry Tucker, the perzine Insufficient Funds. She also contributed extensively to the later issues of Uncle Dick's and edited the fanthology Contact! She first earned her faned cred in her teens with Imp and as editor of the Omekronicle, the clubzine of the Oak Park High School Science Fiction Club.

A fanhistorian, she attended the first FanHistoriCon and became a charter member of the Timebinders. She co-chaired FanHistoriCons 3 and 11. Much of her fannish lexicon written for STET 9 has been incorporated into Fancyclopedia 3, including many post-Eney terms.

In 1993, she and her husband, Dick Smith, won the Down Under Fan Fund, and traveled as delegates to the Australian National Science Fiction Convention in Perth as well as visiting fans across Australia. Subsequently, they were the North American agents for the Australia in 1999 Worldcon bid.