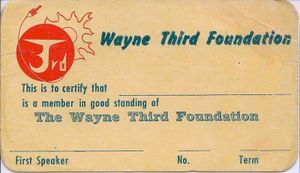 The Wayne Third Foundation (aka Wayne 3rd Foundation, Wayne Third or W3F) was a fan club that began as a student group at Wayne State University in Detroit in the 1960s. After its members graduated, it continued as an informal social club through at least 1982. The name came from Isaac Asimov's Foundation Trilogy.

The W3F published a fanzine called Seldon's Plan, and put on a few one-day conventions called, appropriately enough, Wondaycon. Members of the club were most of the committee for AutoClave, as well, and founded MISHAP, which was collated at meetings.

A 1970s subset of the club were the Suburban Femmefen and Mascot, a mostly high-school aged granfalloon who carpooled to meetings together from Oak Park and Royal Oak and hung out at other times. They were: Terry Nutter (the sole adult), Diane Drutowski, Marge Parmenter, Patty Peters, Anne Shoup, Leah Zeldes and Larry Downes (the mascot).

Outside of club meetings, their activities consisted mainly of cruising Woodward Avenue and drinking coffee all night at Elias Brothers Big Boy. They also roomed together at conventions.

Many W3F members still live in the Detroit area and get together for periodic parties. Vitek began running annual reunions in August 2013. He also maintains a Facebook group.