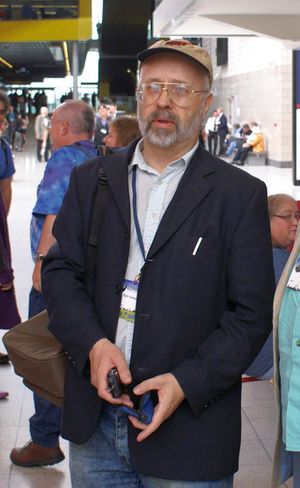 A British fanwriter, artist, and editor active since 1975. His first con was SEACON 75, the 1975 Eastercon, and he was a member of the Newport SF Group, Friends in Space (as a founder), and the Fanhattonites. He married fellow fan Avedon Carol in 1985.

He was TAFF winner in 1984, and FGoH (along with Avedon Carol) at Contrivance, the 1989 Eastercon. He was a contributor of fannish entries for the 1993 edition of Clute & Nicholls's The Encyclopedia of Science Fiction.

Hansen is a major British fan historian, publishing Then, a fanzine and website devoted to fan history; a much expanded book and ebook edition appeared in 2016 as Then: Science Fiction Fandom in the UK 1930-1980. He was brought to FanHistoriCon 6 (held in conjunction with Boskone 32) in 1997 by a special FanHistoriCon Fan Fund. He has edited several further fanhistorical ebooks for Ansible Editions, including the fanthology volumes Then Again: A UK Fanhistory Reader 1930-1979 (2019) – a companion volume to Then with joint editorial credit to Vin¢ Clarke (who selected many of the included articles before his death) – Challenging Moskowitz: 1930s Fandom Revisited (2019) and Homefront: Fandom in the UK 1939-1945 (2020).

He was on the committees of Mexicon I, Conspiracy '87 and Precursor.