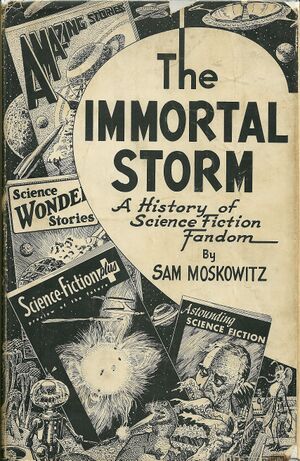 The Immortal Storm by Sam Moskowitz is an amazing book, chronicling the feuds and the fun of the kids in their teens and twenties who created Fandom As We Know It. It has been said with considerable justice that The Immortal Storm is the only book where World War II comes as an anti-climax. (The title is a takeoff on The Mortal Storm, a 1937 novel by Phyllis Bottome about the coming to power of the Nazis in 1933; it was adapted into a film in 1940.)

It was originally serialized in 1945 in A. Langley Searles’s Fantasy Commentator, and in 1951 published in a mimeographed edition. A book version was published in 1954 by Atlanta Science Fiction Organization Press, with later printings by Hyperion Press (1974 and 1989). A 2019 ebook edition is available from NESFA Press.

To see another point of view on the same events, read Jack Speer's Up To Now.