(Did you mean the Canadian Ella Parker?) 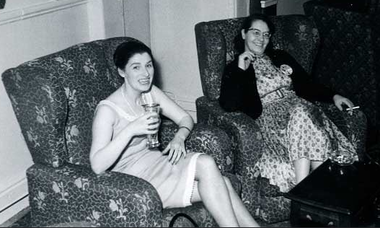 Sadie Shaw and Ella Parker, right, at Petercon, 1964. From the collection of Forry Ackerman.

After writing to Archie Mercer, she attended a gathering of fans in 1958, where she met Ken and Pamela Bulmer and Ron Buckmaster, who introduced her to fanzines.

The following year, she took over Orion from Paul Enever. In 1960, it won the Skyrack Readers Fan Poll for Best Fanzine of the year. In 1961, she won again for The ATom Anthology. Parker ceased publication of Orion in 1962, after she published its 29th issue. That year, she won the Skyrack Readers Fan Poll, this time for Fan Personality of the Year, and took over editorship of Vector for one issue. In 1963 and 1964, she published her apazine Compact for the Offtrails Magazine Publishers Association. She was a member of IPSO.

From 1960 through 1964, she hosted a BSFA open house on Friday evenings at The Penitentiary, her home in London. She also served as its Secretary and as editor of the BSFA Newsletter in the early ’60s. She was on the committee for London, the 1960 Eastercon.

The Parker Pond Fund was created to bring her to the Seacon, the 1961 Seattle Worldcon. The first installment of her trip report, Parker's Peregrinations, was voted one of the Top Ten British Fan Publications of the year. In 2020, Rob Hansen expanded this report with accounts by various fans (including letters from Ella Parker herself) of the rest of her trip, and this was published as the Ansible Editions ebook The Harpy Stateside (subtitle of Parker's Peregrinations).

She was born in Scotland and, with her brother, Fred Parker, was raised in an orphanage.