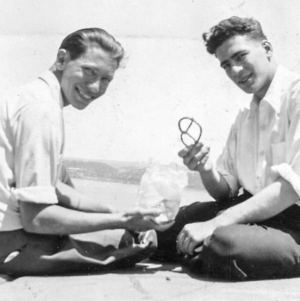 Mort Weisinger was introduced to sf at age 13 through a borrowed copy of an early issue of Amazing Stories (which included both The Skylark of Space and Buck Rogers). By 1930, he was active in (and treasurer of) one of the earliest SF clubs, The Scienceers, and The Planet, one of the first fanzines.

In 1932, Weisinger, Julius Schwartz, Allen Glasser and Forrest J Ackerman founded a fanzine The Time Traveller, which they styled "Science Fiction's Only Fan Magazine". According to SF historian Sam Moskowitz, this fanzine was the first devoted entirely to science fiction. He was also involved with Science Fiction Digest, another very early fanzine.

Weisinger and Julius Schwartz approached T. O'Connor Sloane, the editor of Amazing Stories sold his first story, and in 1934 suggested to Schwartz that they become agents and they formed the Solar Sales Service, an agency specializing in the SF, and fantasy. Edmond Hamilton and Otto Binder were their first clients and they eventually represented many others including John Russell Fearn, Alfred Bester, Stanley Weinbaum, H. P. Lovecraft, and Ray Bradbury.

Weisinger soon left the agency and took a job with the Standard Magazine chain which acquired Hugo Gernsback's defunct Wonder Stories and added it to Standard series of "Thrilling" publications. Weisinger became the editor of Thrilling Wonder Stories, and was soon editing a number of other pulps, including Startling Stories and Captain Future, and "was in charge of no fewer than 40 titles" by 1940.

In 1941 he moved to DC Comics and left the SF world and is now best known for editing DC Comics' Superman during the mid-1950s to the 1960s. He also co-created such features as Aquaman, Green Arrow, and Johnny Quick, served as story editor for the Adventures of Superman TV series, and compiled the often-revised paperback 1001 Valuable Things You Can Get Free.