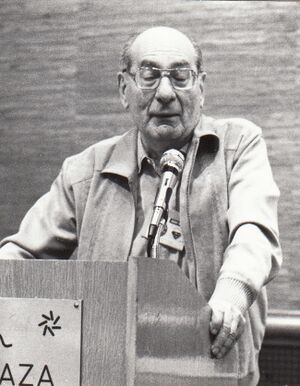 Julius Schwartz at the Mimosa Live event at Chattacon 13 in 1984. Credit Rich Lynch.

Julius “Julie” Schwartz was an early fan, literary agent, and pulp magazine editor as well as having a major involvement in comic books.

He was born in 1915 in New York City and was one of the founding members of the first fanclub, The Scienceers, in 1929. In 1932, he published (co-edited by Mort Weisinger and Forrest J Ackerman) The Time Traveller, one of the first fanzines and also fanzine Fantasy Magazine. He helped organize the first World Science Fiction Convention in 1939. He was the inspiration for the character M. Halstead Phynn in Rocket to the Morgue.

With Weisinger he founded the Solar Sales Service literary agency in mid-1934 which represented such writers as Stanley G. Weinbaum, Robert Bloch, Alfred Bester, Ray Bradbury, and H. P. Lovecraft and was the first SF specialist agency. Starting in 1944 he left his literary agency and became an editor at a predecessor of DC Comics where he spent the rest of his career, working on such titles as Batman and Superman.

He continued to be active in fandom and comics until shortly before his death. In 2000, he published his autobiography, Man of Two Worlds: My Life in Science Fiction and Comics, co-authored with Brian Thomsen: an illustrated memoir of his life in SF and comic books, published by HarperCollins. Harlan Ellison provided an afterword. Included are lists of awards won by Schwartz and of his appearances in comic books over the years.

He wrote a reminiscence of NYcon for the Noreascon Three PB.