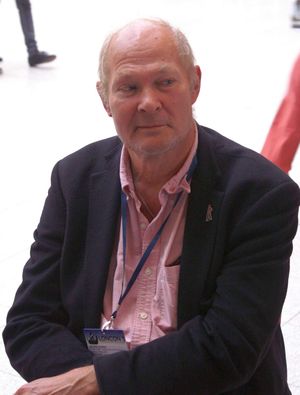 John-Henri Holmberg is a Swedish fan (from age 13), writer, publisher, critic and translator. In the early 1960s, he edited Science Fiction Forum with Bertil Mårtensson and Mats Linder and published over 300 fanzines of his own. He led clubs and chaired conventions, including Stockon 5 and Stockon 6. He was a member of the Stockholm in 1976 and Stockholm in 1980 Worldcon bids, and was co-editor of Asgard. One of the fans with whom he worked was fellow Swede Stieg Larsson. He has continued his fannish life alongside his professional career as editor and critic.

He is a contributor to John Clute and Peter Nicholls' The Encyclopedia of Science Fiction and The Encyclopedia of Fantasy and is probably the major voice of both SF and fandom in Sweden. Since 2004 he has edited and published the resurrected Nova science fiction (which in its earlier incarnation he also edited from 1982 to 1987), the largest Scandinavian prozine.

In 1986, he published Fandom Harvest, a collection of Terry Carr's fanwriting, under his Laissez Faire Produktion AB imprint.