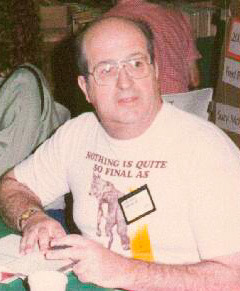 Gene Rodman Wolfe, a Chicagoland fan and pro writer, was an active letterhack and contributor to fanzines, especially during the 1970s and '80s, as well as a regular congoer. He was a member of SFFNCS. Gene was GoH at Aussiecon Two, the 1985 World Science Fiction Convention, and at AutoClave 1, the first fanzine convention, in 1976, where he gave a memorable, comic speech.

As an author, he is probably most famous for The Book of the New Sun tetralogy, launched in 1980. His work is especially known for his use of archaic, obscure and made-up terms, such as fuligin.

Wolfe told a story from his early days as an author in which he would send off his stories to magazines in alphabetical order. After a story (most likely "Mountains Like Mice," but possibly "House of Ancestors") was rejected by Galaxy Science Fiction, he sent it off to IF, not realizing that Frederik Pohl was the editor of both magazines. He received an acceptance from Pohl and IF commenting on how much Gene's re-write had improved the story despite the fact that he hadn't changed the story at all.

In another story from early in his career, Wolfe was attending a science fiction convention and went up to Pohl, whom he had not yet met in person, and thanked him for purchasing some of his stories and his support. The editor listened graciously and thanked Gene for submitting. It was only later that Gene learned that he had been talking to Lester del Rey.

At the 1971 Nebula banquet, Isaac Asimov announced Wolfe's short story "The Island of Doctor Death and Other Stories" as the winner. As Wolfe began to walk up to accept the award, Asimov realized he had made a mistake and announced that in actuality, the "winner" in that category was "No Award." Asimov tried to make like of his mistake by commenting that if Wolfe wrote a story called “The Death of Doctor Island,” he would surely win a Nebula. Wolfe went on to write a story with that title and it won the Nebula for Novella in 1974. (Wolfe would also published the stories "The Doctor of Death Island" and "Death of the Island Doctor.")

He was born in New York and educated in Texas, but spent most of his life in Illinois. After getting out of the Army, he became an industrial engineer. His most famous engineering achievement is a contribution to the machine used to make Pringles potato chips. He edited the journal Plant Engineering before retiring to write full-time. His NESFA Press collection Plan[e]t Engineering was a take-off on the journal's title.

Wolfe was a religious Catholic. He was married to Rosemary Wolfe; they had four children.