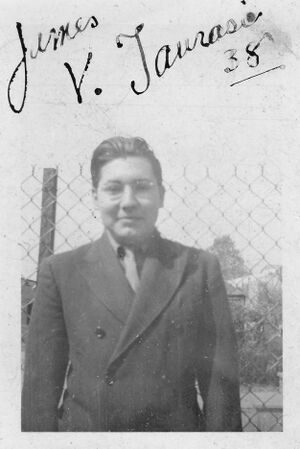 One of the creators of fandom as we know it. In the late 1930s, James Vincent “Jimmy” Taurasi was one of the Triumvirs, part of the leadership of the First Worldcon, one of the originators of New Fandom, founding member of the QSFL and the GNYSFL. He was generally on the opposite side of fan feuds from the Futurians. (At one point, John Michel called Turasi "il Duce of Flushing Flats.") He was active in fandom from the mid-1930s to the mid-60s.

He was fond of using pennames, including Herman Von Tok, Lane Stannard and J. Harry Vincent.

He was an avid reader, following the prozines closely. He had many letters and essays published in SF prozines, including Astounding, Amazing, Startling Stories, Famous Fantastic Mysteries, Comet, and Super Science Stories.

He was part of the Scientifilmakers, an early fannish attempt to create a true SF (or, rather, stf) movie. He was involved in the following publishing houses: Taurasi-Thompson Publications, United Publications, and Cosmic Publications, which became Fandom House. He was one of the leaders of the Fanvets. He was a member of ESFA, the Lunarians, Neofund, FAPA and the Silvercon committee, attended the 1938 Philadelphia Conference, and received the Big Heart Award in 1963.

Fantasy-News 85 (February 4, 1940) reported that Taurasi was engaged to Rose Alberti, Frances Alberti Sykora’s sister, but we haven’t found any evidence the marriage came off. He was married at least to a woman named Millie. They had two sons, James Vincent Taurasi, Jr., and Robert Alfonso, according to Fantasy Times 229 (August 1955). (Oddly, Taurasi’s sister, who attended the first Worldcon, was also named Millie.)

James, Jr., married a woman named Lynn and they had a son named James Vincent Taurasi III, who is an active member of YouTube and Instagram. He and his wife, Amber McCaslin Taurasi, are the parents of James "Vinny" Taurasi IV, according to Lynn’s obituary in The News & Observer on May 2, 2021.

The switch to Fandom House was triggered by the attempted merger of the monthly Fantasy Times with Will Sykora's Fantasy-News with Fantasy News being weekly and Fantasy Times being a monthly recap. This fell through, but Taurasi kept Fandom House.

Since Fantasy Times was the Locus of its day, it seems clear that Fandom House, while still essentially a fannish publishing house, was easily the largest of them.

Fancy 2 reports (under Legal Matters) that "Taurasi was threatened in '56 by Random House, which alleged that JVT's use of the name "Fandom House" in publishing Fantasy Times constituted unfair competition. Tho somewhat flattered, Jas decided not to fight it, having learned that simply bringing the case to court would rock him $300." Not only did he use the name (which he probably could have gotten away with), but for a time he used a logo which looked suspiciously like Random House's.