(Did you mean Evelyn E. Smith?) 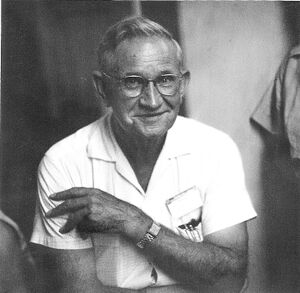 Doc Smith at Solacon, 1958.
From the collection of Karen Anderson.

Edward Elmer Smith, Ph.D., aka E. E. Smith, Doc Smith and Skylark Smith, was the father of space opera and the first great in the SF genre. He is best remembered for his Lensman saga.

He was born in Wisconsin, attended the University of Idaho and then George Washington University and earned his Ph.D. in Chemical Engineering in 1918. Like his The Skylark of Space protagonist, Dick Seaton, Smith was a chemist at the Bureau of Standards (but unlike, Seaton, he did not discover any marvelous new elements). During this period, he began Skylark, a seminal and highly influential novel of super science.

After graduation, he worked as a chemist in the food industry in Battle Creek, MI, developing new doughnut mixes, while continuing his writing. He was unable to get Skylark published until Amazing Stories was launched and it was published in the August–October 1928 issues. It was an immediate success, and sequels quickly followed. In the late ’30s, F. Orlin Tremaine bought his new, Lensman series for Astounding.

The Galactic Roamers grew around him in Michigan in the early 1940s, and he attended the Michiconferences and welcomed visiting fen and Slan Shackers into his home.

By this time, Smith was the Grand Old Man of SF (though at no time was he ever the Most Senior SF Writer) and in 1940, at Chicon I, he was the first writer to be honored as Worldcon GoH. NESFA's Skylark Award is given for people who, like Smith himself, are pros who are also mensches. Moscon gave the Doc Smith Second Stage Lensman Award in his memory.

While he was a pro, he was also fannish and beloved by all. He was an honorary member of the Misfits. He was one of the singers who serenaded the attendees of the Hugo Awards Banquet at Pittcon in 1960.

He was married to Jeannie Smith; they attended many cons together. Their daughter Verna Smith Trestrail was a fan and his literary executor. Daughter Clarrissa was a fan, too. The contagion doesn’t seem to have spread to their son, Roderick. Grandson Kim Trestrail is now executor.

He attended every Worldcon he could, but missed the 1964 Worldcon due to surgery for lung cancer, and died a year later at age 75 of a heart attack.

E. E. Smith was not a particularly good writer, but he was a great one. 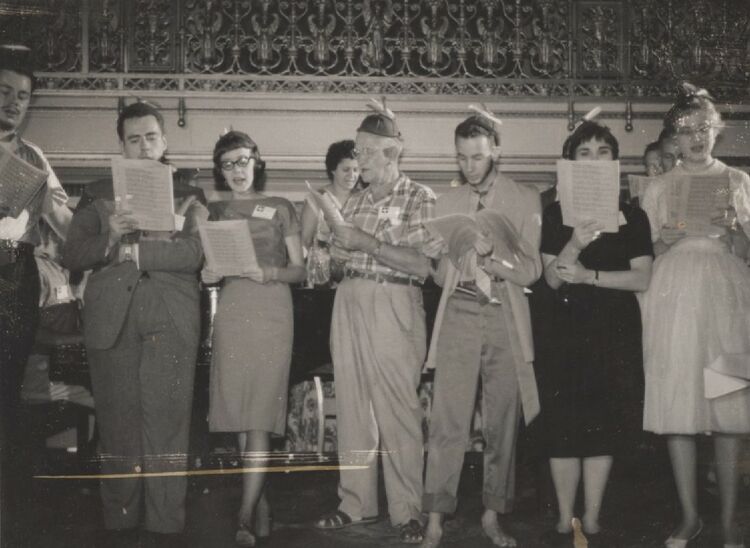 Doc Smith at center of the propeller beanie-wearing singers at the Pittcon Hugo Awards Banquet.

Smith wrote The Skylark of Space between 1915 and 1921 while working on his doctorate in chemistry. Though the original idea for the novel was Smith's, he co-wrote the first part of the novel with Lee Hawkins Garby, the wife of his college classmate and later neighbor Carl Garby. Lee Garby supplied the "love interest" in the novel.

The Skylark of Space is considered to be one of the earliest novels of interstellar travel and the first example of space opera. Originally serialized in 1928 in the magazine Amazing Stories, it was first published in book form in 1946 by the Buffalo Book Company.

The novel was followed by several sequels, beginning with Skylark Three, Skylark of Valeron and Skylark Duquesne. (Blackie Duquesne was the villain in the series. Bill Evans and Ron Ellik compiled The Universes of E. E. Smith (published by Advent) which is a concordance to both the Skylark and Lensman series.

It was hugely important to the very young stf field, (though its successor, Smith's Lensman series was even more so.)

Smith himself was nicknamed "Skylark Smith". NESFA's Skylark Award takes its name from this series as did two fannishly famed cars: Art Widner's Skylark of Foo and his later Skylark of Woo-Woo.

Beginning with Triplanetary in 1934, this space opera series was of enormous significance to sf and early fandom, and still resonates, despite the wonkiness of Smith’s prose. It inspired much fanspeak.

See Lensman saga for much more.