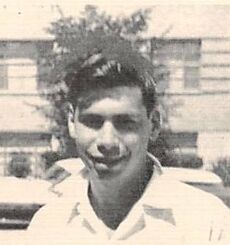 Bob Silverberg (often known as Agberg or Silverbob) was an early fan who began submitting stories to the prozines in the late 1940s and found fandom in 1949. He was GoH at Heicon '70, the 1970 Worldcon in Heidelberg, Germany.

He was a prominent and active fan in the 1960s, and wrote frequently for fanzines. His own fanzine was called Spaceship and the early issues did not, perhaps, contain his best writing. He extended Jack Speer's theory of Numerical Fandoms in an influential article in Quandry in 1952.

He has been a member of FAPA continuously since November, 1949, publishing Irusaben with Saul Diskin and Spaceship and Snickersnee by himself. In 2007, Silverberg was elected president of FAPA.

In the 1960s, Silverberg returned to SF, writing more literary stories and novels, including To Open the Sky, To Live Again, The World Inside, Downward to the Earth and Dying Inside. His story Nightwings won the 1969 Best Novella Hugo. He won a Nebula Award in 1970 for the short story "Passengers". He won two more the following year (his novel A Time of Changes and the short story "Good News from the Vatican") and one more in 1975 for his novella "Born with the Dead". He was half of Robert Randall.

He moved from New York to the Bay Area in 1972 and announced his retirement from writing in 1975. But in 1980, he returned triumphantly with Lord Valentine's Castle, the start of the popular Majipoor series. He received another Nebula in 1986 for his novella "Sailing to Byzantium", a Best Novella Hugo in 1987 for "Gilgamesh in the Outback" and a Best Novelette Hugo in 1990 for "Enter a Soldier. Later: Enter Another."

The April, 1974 issue of F&SF was a special Robert Silverberg issue. His autobiography, Other Space, Other Times: A Life Spent in the Future, appeared in 2009 from NonStop Press.

Silverberg was born in Brooklyn in 1935. He has been married twice. First to Barbara Brown, in 1956. In 1987, he married fellow science fiction author Karen Haber.