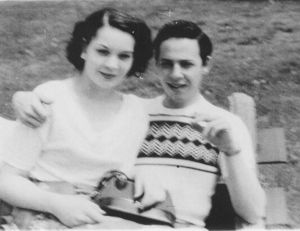 Nancy Moore with Ben Singer at Midwestcon 2 in 1951.

Nancy Moore (later Shapiro, then Raney) was a Midwest fan active in the 1940s and ’50s. A native of Cincinnati, she attended the Cinvention in 1949.

She was one of the fans who appeared in costume at the Cinvention, and posed for newspaper shots with Miss Science Fiction. Nancy attended Midwestcon regularly.

She moved to Detroit in 1951 after meeting Ben Singer at Midwestcon 2, joined the Misfits and shared an apartment with club member Agnes Harook. 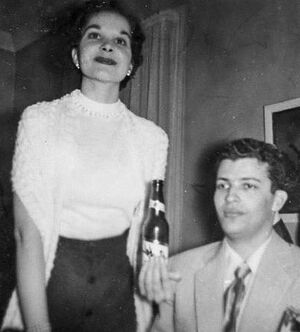 After an on-and-off relationship with Singer, she married his friend Hal Shapiro in 1953. He described himself in his 1956 TAFF platform, “Partner in one of the most famous fan mar­riages of the century, being espoused of the beauteous Nancy Moore (now Shapiro).” It lasted just a few years.

She moved back to Cincinnati after their divorce and joined the Army. She married a mundane, Dave Raney, in 1961 and gafiated.