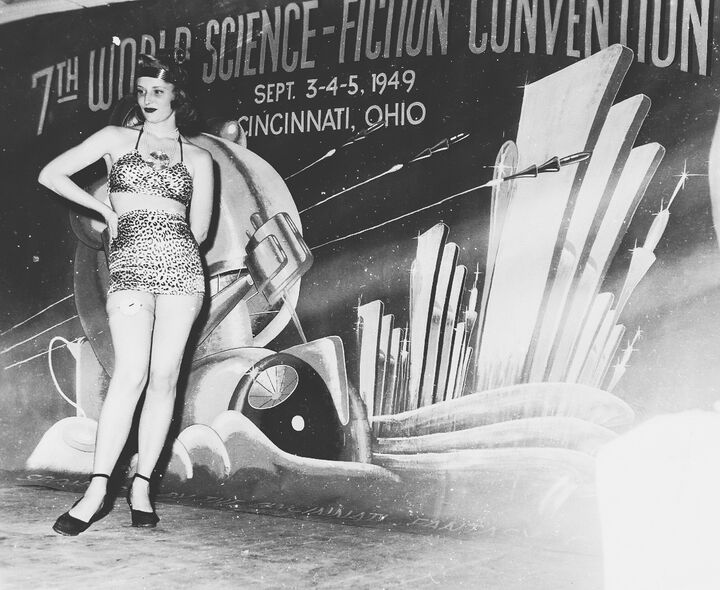 Lois Jean Miles, “Miss Science Fiction,” at Cinvention, 1949.
She “sported a walkie-talkie attachment,” noted the Cincinnati Enquirer, but “had a difficult time keeping receiving set upright on her blond head.” The backdrop is by Bill Kroll. (From the collection of Forrest J Ackerman via Andrew I. Porter.)

“Lois Miles,” wrote Roy Lavender in his 1949 Cinvention conrep, “The Convention Scene Dimly,” “Found that she was a most appropriate choice for "Miss Science Fiction", even if only by chance. She really does read s-f and can talk it with the most rabid of the fans. Need I add that only the most rabid fans would? Our best to her. She did her job well.”

Other attendees disagreed, as Dick Eney wrote in Fancyclopedia 2, and few seemed to take the time to figure out who she was, apparently in an early “Fake Geek Girls” reaction.

According to a 1976 account by Fred Patten, Miss Science Fiction was one of several fans who posed in costume for the benefit of the press. She wore “a sort of leopard-spotted swim suit with a telephone dial strapped to one thigh and a walkie-talkie cap.”

Though Dave Kyle’s girlfriend at the time, Miles, in fact, was a member and secretary of the Hydra Club, and a schoolmate of Carol Stanton’s. 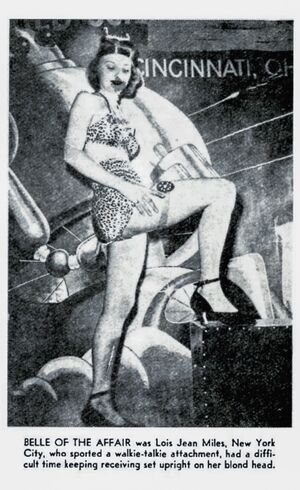 Kyle recalled in Mimosa 10 (July 1991): “It wasn’t until my return to the New York scene to start Gnome Press with Martin (the original) Greenberg in the late 1940s that I had a steady girl friend who became part of the science fiction crowd, Lois Miles. She was a garment district model, a tall girl from Pennsylvania described by my friends as a ‘beautiful, blue-eyed blonde who deserves better.’ Lois became a regular at the Hydra Club, and when I became chairman, she became the secretary.”