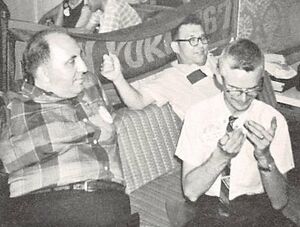 Edward Wood was a long-time sercon fan and well-known curmudgeon. He became a fan some time in the 1940s and worked on many regionals and Worldcons. He was a member of the University of Chicago Science Fiction Club, the Little Men, Pensfa, and PSFA; also First Fandom and Burroughs Bibliophiles. He co-published the Journal of Science Fiction (1951–3) and co-founded of Advent:Publishers, a major fannish small press, in 1956. He was a reviewer for Luna Monthly and Science Fiction Times (also Analog for two issues in 1979).

He married fellow fan JoAnn Wood. They lived for many years in Chicago (or its environs – Resnick mentions Milwaukee around 1970) before moving to Hurst, Texas. They had a son, Larry.

"Ed did something with atoms for his living […] so highly specialized that only four or five places in the country were doing advanced enough work to hire him -- and when computers came along, he wound up teaching computer courses in college." (Resnick)

He was a passionate collector, which two stories exemplify:

Before he and JoAnn were married, she and a friend decided to clean up his kitchen. (Presumably he lived in fannish splendor.) He was sitting in his book and magazine-filled living room when JoAnn called, "Hey, Ed, where's the Comet?" He replied, "On the third shelf next to the bedroom door. There were five issues between December 1940 and July 1941."[1]

At FanHistoriCon 3 in 1995, Ed was attending a panel on what do we want to happen to all our stuff after we die? Partway through the panel, Ed stood up and dramatically announced that he was not going to pass his collection on to anyone. It made sense only in the context of his life and when he died he was going to have it burned as a funeral pyre. He then stalked out of the room. (Ed was given to the occasional bit of drama.) JoAnn whispered loudly, "Like hell he is!"

In 1966, at Tricon, the 1966 Worldcon, at the "Critics in Science Fiction" panel, Ed stood up, shook his fist, and roared, "I will not stand idly by and see the grandeur and glory that is science fiction crucified upon a cross of pedantic scholasticism." – This was compared to the later Let's Take Science Fiction Out of the Universities and Put It Back into the Gutter Where It Belongs. Even the editorial of the final, 1953 issue of the Journal of Science Fiction complained “The cynical transformation of science fiction from a literature of ideas into a literature of style is just about complete” (on the matter of increasing inclusion of sex in SF, followed by such literary conceits as "gloom, despair, degradation").[2]

Ed Wood was semi-immortalised in The Enchanted Duplicator as Dedwood, who, like Ed, was sercon and disapproved of fandom's light-hearted, irreverent side. Ed had once boasted of having thrown away every issue of Walt Willis's classic fannish Hyphen, unread.

Resnick writes that Ed Wood "was a purist […] Gernsbackian in his tastes, rather than Campbellian." Among Wood's many acts of generosity, he mentions persuading JWC not to reject Doc Smith's Children of the Lens (1947) although it was too embarassingly crude for what Astounding had become since the 1930s, stressing that back then the magazine relied on and benefited from Smith.