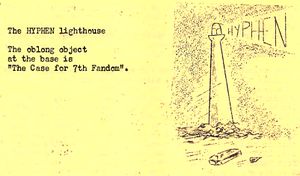 Hyphen was a fanzine, the successor to Slant, published between 1952 and 1965 by Walt Willis and Chuck Harris. Ian McAulay became co-editor with issue 25, and Madeleine Willis also acted as co-editor.

Hyphen was more fannish and less sercon than Slant and is widely regarded as being one of the greatest fanzines ever published. Contributors included Atom, who drew much artwork straight on to stencil; Bob Shaw, whose regular column was titled The Glass Bushel; and James White.

A final issue was published in 1987 after a hiatus of 22 years to celebrate forty years of Irish Fandom. It was nominated for the 1956 Best Fanzine Hugo and, in 2004, the 1954 Best Fanzine Retro Hugo.