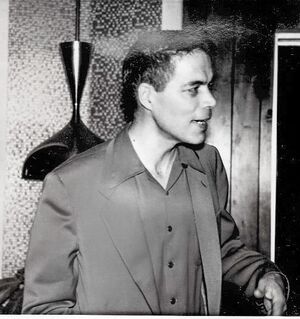 Charles Edward Burbee, 'Burb' to friends, was a famously acerbic Los Angeles fanwriter active in the 1940s. In many ways, Burbee set the template for faanish fanwriting with his tone of irreverence, puncturing pomposity and generally being hilarious. He was one of the original Insurgents, and followed in Tucker's footsteps in bringing humor into fanzines. He is famously credited with the invention of sex.

Burbee was briefly editor of Spacewarp, published Burblings and Man from FAPA and was a long-time member of FAPA and a member of the FATE Tape. He published the parody FAPAzine The Best Loins Are on the Floor. He also published One Fingers Number Four Fingers Number One (with F. T. Laney, Walt Leibscher, and Jack Speer), Pneumo and other one-shots listed below. He had pretty much gafiated by 1950, with a limited revenance in the 1970s.

Although Burbee was long gafiated by then, he was FGoH at Westercon 27 in 1974, after timebinding fanzine fans had resurrected an interest in his fanac. He was chosen Past president of the FWA in 1995. In 1996, he was nominated for the 1946 Best Fan Writer Retro Hugo, and Shangri L'Affaires, edited by Burbee and Gerald Hewitt, was nominated for the 1946 Best Fanzine Retro Hugo.

Bill Rotsler published appreciations by various fans as Homage à Burbee in 1956. Terry Carr and others published the Incompleat Burbee, a festschrift of his fanwriting, in 1958; this was reprinted from the original stencils (with some corrections and additions) in 1959 and 1974, with a second edition published by Joyce and Arnie Katz in 1993; it was reissued as an Ansible Editions ebook in 2022. In the 1970s, Terry Carr cut stencils for The Incomplete Burbee, Volume 2, eventually published by Jeff Schalles in 1996.

Burbee was especially productive at coining fannish catchphrases and expressions, known as "Burbeeisms," which continue to resonate in fandom, although not always in the (usually mocking) sense Burbee intended, among them: BNF, FIJAGH, Crifanac, "That's Not Too Many," "Meyer," "It Certainly Is a Wonderful Thing," "Sensitive Fannish Face" and "AKICIF."

He had his downsides, among them a wounding wit that he aimed at fans he disliked (although not to the extent of his friend and fellow LASFan Francis T. Laney) and expressions of homophobia that to contemporary eyes seem extreme even for the period. He and Laney had a mutual-admiration society, Laney coining the phrase “Fabulous Burbee-Like Character.” They made such mock of Al Ashley with the Ashley Mythos, which Harry Warner said was an unfair characterization, that Ashley left California and gafiated.

In mundane life, he was a machinist. He was married to Isobel Burbee.