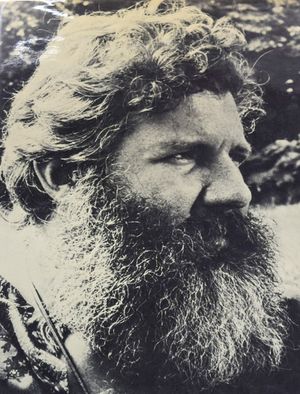 Walter Henry Breen was an American fan and author. He was an actifan for much of his life. He wrote for fanzines, and took over editorship of the fanzine Fanac from Terry Carr and Ron Ellik, though he was unable to retain the elan which made their issues so important.

He published Olla Podrida (for OMPA), Allerlei (for FAPA), Tesseract and Sapterranean. He was also in CRAP, SAPS, The Cult, and IPSO. He also published Admirable Crycon and two issues of An Egoboo a Day from All Over as riders to Fanac. The Walter Breen Appreciation Issue was published in his honor by Dave Rike in June 1962. He was a member of the second Futurian Society of New York (the ’50s club), the Fanoclasts, LASFS and the Golden Gate Futurians.

The central fact of Walter Breen's fannish life was the Breendoggle (aka Breen Boondoggle or the Breenigan), a fandom-wide feud over his exclusion from the 1964 Worldcon due to pederasty.

There had been rumors and suspicions for years that he had molested young boys. Breen's behavior at conventions at the time seems to have been beyond reproach, yet many fans, especially in the Bay Area, did know he had engaged in sex with boys, and several fan parents had caught him in compromising situations with their children.

In 1963, six years after the second Exclusion Act, the Pacificon II committee therefore acted to ban Breen from the 1964 Worldcon. Unfortunately, they went about it in a fairly hamfisted way and All Fandom Was Plunged Into War.

Well before the Worldcon, Chairman Bill Donaho outlined the committee's concerns, detailing incidents which had been observed regarding Breen in a fanzine called The Boondoggle (full title: The Great Breen Boondoggle or All Berkeley Is Plunged into War). This was marked as a letter-substitute and also marked as DNQ. The concom also issued a more official Pacificon II Committee Report on the Cancellation of the Membership of Walter Breen. It explained that they had been advised that they might be held liable if Breen were to seduce an underage boy there.

At around the same time, Breen was blackballed by the 13 members of FAPA needed to drop him from FAPA's waiting list, but within a very short period of time a different group of 13 blackballed the entire waitlist. The Secretary Treasurer took notice of the fact that FAPA had no waitlist, and came up with a handy list of names -- which "just happened" to be the original waitlist (before Breen was blackballed) in the original order. This became moot when Breen took on a de facto membership when he married Marion Zimmer Bradley, who was already a member.

Fandom’s reaction was both shocked and decidedly mixed. Breen had as many supporters as detractors. Some of Breen’s supporters didn’t believe the allegations, while others did, but thought it wasn’t the concom’s role to police a fan’s behavior.

Despite protests and even outright boycotts by some, Breen was not allowed to attend the Pacificon II.

Over the years, evidence has become public and we can now be sure that Breen was guilty of substantially what he was accused of. Perhaps most damning, his wife, Marion Zimmer Bradley, one of his vigorous defenders at the time, later testified under oath that she was aware of his activities. (Revelations about Bradley’s own abuses have also come out.)

Breen had been convicted of child molestation or lewd behavior in Atlantic City in 1954, resulting in a probationary sentence, a fact apparently unknown in fandom. He also published an authoritative book on man-boy relations, Greek Love, under the pseudonym J. Z. Eglinton in 1964.

Breen was arrested on child molestation charges in 1990. He accepted a plea bargain, which resulted in three years' probation. A year later, he was charged and convicted with eight felony counts of child molestation involving a 13-year-old boy.

Even decades after the event, the sole point fans on both sides could agree upon is that the resulting feud had long-lasting effects, including leading to a proliferation of mutually exclusive private apas where the opposing forces retired to lick their wounds and assure themselves that they had been undeniably right while the other side had been unmistakably wrong. Donaho later (by Feb 10, 1964, per a letter to Alva Rogers) came to believe that the expulsion was "both ethically wrong and stupid."

Those defending Breen had a number of reasons, but the main one seems to have been that while Breen's behavior was known to some, many, if not most, fans were unaware. Only ten years after Joe McCarthy, fannish tolerance for unsubstantiated accusations was very low, so when the first that many people heard about Breen's activities was an official committee publication, the reaction was multifarious.

Moreover, attitudes in the 1960s were markedly different than they are now: While many fans were shocked and disgusted by the allegations, others thought that objecting to consensual relations between adults and children was “square,” an attitude Pacificon II concom member Al Halevy scornfully summed up as, “though he may seduce children, seduction isn't such a bad thing, and anyway the kids like it,” to which Halevy answered, “Rubbish!!!” Still others worried about setting the precedent that cons were in loco parentis for young attendees.

Breen married SF writer Marion Zimmer Bradley on June 3, 1964. They had two children and separated in 1979 while remaining married, and continued a business relationship and lived on the same street until Breen moved to Oakland, CA. They officially divorced on May 9, 1990, after Breen was arrested on child molestation charges, though MZB later testified that she had been aware of his activities for many years. After her death, their children, Mark and Moira Greyland, accused her of child sexual abuse and rape as well.