Star Trek Lives! was one of the earliest and most influential Star Trek conventions. It was fan-run, with many members of the committee also active in the Lunarians and working on Lunacon. The convention was also known as the Star Trek Con, the Committee Con and as the International Star Trek Convention. 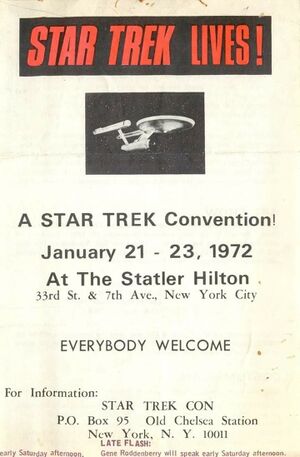 The first convention by this group was held January 21–23, 1972, at the Statler Hilton Hotel in Manhattan and included as guests Gene Roddenberry, Majel Barrett, Isaac Asimov, Hal Clement and D. C. Fontana. The organizers expected 500 people, but 3,000 showed up leaving the committee alive, but overwhelmed.

In 1973, the convention moved to the Commodore Hotel and attracted approximately 10,000 people to its convention on February 16–19.

International Star Trek Convention On February 15–18, 1974, the convention attracted between 10,000 and 14,000 people (Locus reports 8,000-12,000) to the Americana Hotel, and and had to turn people away each day due to Fire Marshall concerns — causing at least one small riot in front of the hotel. There were complaints about the crush and the bad attitude of some committee members (a walk-out from the costume ball was triggered by a committee member cursing at one of the invited guests).

The problems in New York caused Equicon in Los Angeles to impose a membership cap.

The committee fissioned, leaving records in disarray. Shortly after the convention, the committee announced that they no longer had any connection with Al Schuster and "and and all future debts he may incur in the name of the Convention will not be paid or honored, and he no longer has any authority to incur expenses, arrange contracts or conduct business in the name of the convention." They also distinguished themselves as __The__ Star Trek Convention as opposed to Schuster's __International__ Star Trek Convention. They also reported that they had "misplaced" their list of non-attending members in the 1974 convention and pre-registered members of the 1975 convention.

In 1976, the giant Star Trek conventions seemed to hit a wall: The Chicago Star Trek/Space Spectacular, "The Greatest Show Since Earth" was held in June. The committee did heavy advertising including TV spots, and had rented the Chicago Amphitheater, which seats 13,000. The got 200 people on Friday and 800 on Saturday and then cancelled the convention. They did not pay the stars who came and the convention was reported to have lost multiple hundreds of thousands of dollars.

New York Star Trek '76 attracted between 20,000 and 50,000 people according to the New York Times with many ticket holders being turned away when the facilities were completely swamped. (Its committee seems to have been entirely unprepared and quite disorganized.) The New York Attorney General investigated and both fan-run conventions ended.

This had a fortunate side-effect in that it probably helped to kill the SF Expo, a convention planned for June of that year at the New York Hilton which was an attempt to create a regular SF convention on the scale of the Star Trek conventions.