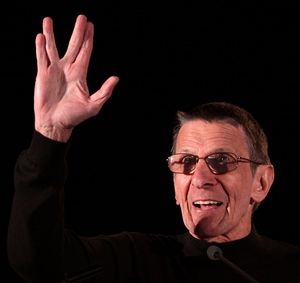 Star Trek is an American SF media franchise created by Gene Roddenberry (affectionately called “The Great Bird of the Galaxy”) that follows the adventures of the Starfleet starship Enterprise and its crew.

The series was produced from 1966–1967 by Desilu Productions and by Paramount Television from 1968–1969. Star Trek aired on NBC from September 8, 1966 — after a premiere shown at Tricon, the 1966 Worldcon — to June 3, 1969. Although this television series had the title Star Trek, it later acquired the retronym of Star Trek: The Original Series (initialized as TOS) to distinguish the show within the media franchise that it began.

The show had a major influence on popular culture, and it became a cult classic in syndication during the 1970s. It eventually spawned a franchise that consisted of five additional TV series, 12 theatrical films, and numerous books, games, toys, and other products.

Among other things, it showcased the Vulcan salute, a hand gesture cribbed by Nimoy from Jewish ritual, and its accompanying catchphrase, “Live long and prosper” (“LLAP”). (Some fans have suggested the salute should replace handshakes amid the Covid-19 pandemic.)

The initialism IDIC also found its way into fanspeak, along with the catchphrase “He's Dead, Jim,” based on a frequent line of Dr. McCoy’s, and the term redshirts, which refers to crew members wearing red Starfleet uniforms, who are often killed, and hence any expendable stock characters in fiction.

Although the sneak peek at Tricon evoked little comment, perhaps because it occurred at 7 p.m. Monday, the series had a huge impact on fandom, too. Some fanhistorians attribute the increased number of femmefen in the late 1960s and ’70s to the show’s popularity, but fandom itself grew exponentially during that period as well. Whether it was Steam Engine Time or Star Trek, science fiction began to lose some of the stigma it had previously carried in the macrocosm, although some derided goshwow fans of the series as “pointy-eared Trekkies.”

Ad astra per aspera — “To the stars through difficulties” — the motto of Starfleet.

A letter-writing campaign headed by Bjo Trimble that is credited with allowing the Star Trek TV series to run for a third season rather than being canceled after two.

Bjo and husband John Trimble were responsible for heading other causes, including the campaign to have the first of NASA's space shuttles named Enterprise.

Star Trek fandom, the first media fandom, is separate from and independent of mainstream sf fandom. In the 1960s and '70s, especially, it had a great degree of overlap. Trekdom began with a letter-writing campaign that originated with Bjo Trimble in sf fandom, appealing to fans to write Paramount to urge reconsideration when the network intended to cancel the show after only two seasons. The letter-writing campaign actually paid off and the network reconsidered.

Aficionados of the show began publishing fanzines about and, while attending multi-media conventions under the broad umbrella of sf fandom, also began having conventions of their own.

"Trekkers" is a polite way to refer to these people -- the one the majority of them accept. They consider "Trekkies," a term that has been credited to Art Saha, derogatory.

The rise of Trek fandom began to bring people into sf fandom, folks who had been turned on to sf by the show or who had first learned about sf conventions via Star Trek.

It has been remarked that, in the mundane world, some of the most devastating holy wars have been between, not different religions, but different sects of the same religion. It is true that there is something of this going on here, as many sf readers consider Star Trek to be mediocre or even "dumbed down" sf. 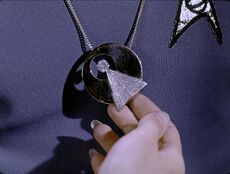 An initialism for “Infinite Diversity in Infinite Combinations,” IDIC is both a Vulcan philosophy and a symbol, according to Bjo Trimble in the Star Trek Concordance:

The insignia, a triangle set in a circle, first appeared as a pendant worn by Spock in the third season of the original series in the episode "Is There in Truth, No Beauty?" (1968). He explained, “The triangle and the circle ... different shapes, materials, textures ... represent any two diverse things which come together to create here ... truth or beauty.”

Gene Roddenberry later sold replicas, reportedly the reason they were introduced into the show.