Nudity and near nudity have been part of fandom from early days, sometimes more, and sometimes less approved of.

Forrest J Ackerman and Morojo, among the first fans, were involved in the mundane nudism movement. 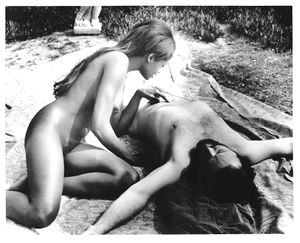 Early fanzines were full of drawings of nude women — “The VoMaidens,” wrote Jack Speer in 1944, “are criticized mainly for lack of artistic merit; only a minority disapproved for reasons of morality.”

In February 1960, Trina Castillo appeared in a cover photo on Fanac #53 wearing only a propeller beanie and a copy of Fancyclopedia 2. The first ish of Tom Reamy and Ken Keller’s slick fanzine Nickelodeon (1975), featured a full-color centerfold of a nude Steven Utley, “Nickleodeon’s Naked Neo-Pro Discovery.” No. 2 had two centerfolds, Jim Thomas and Fran Calhoun. The entire Stilyagi Air Corps posed unclad for a photo meant for a future issue, which didn’t appear only because Reamy died. Alan White’s 1980s fanzine Delineator was also known for nude photos.

Bill Rotsler’s photography of nude women was well publicized, and later, James Stanley Daugherty’s. Elessar Tetramariner found plenty of fan models for his photo albums full of topless poses, until he got into trouble for a picture of someone too young to legally grant permission.

In the 1960s and ’70s (maybe even the ’50s), mass skinny dipping was frequent at conventions, especially in the Midwest, often with special arrangements made with hoteliers by savvy concoms who knew that, absent such plans, fans would do it, anyway. ConFusion, faced with a hotel with a pool that featured glass walls, put up large sheets of paper to block the views of passersby, less to protect the fans’ privacy than to avoid shocking the mundanes.

At Noreascon One in 1971, Susan Wood initiated Le Front de Liberation de la Piscine, the Piscine being the hotel swimming pool and the Liberation being skinny dipping.

When, at the first AutoClave in 1976, a naked Mike Glicksohn got out of the pool to discover someone had gone off with his clothes, he merely sauntered casually down the hall to his room.

At NorthAmericon in ’79, fans followed the Southern fandom con tradition of skinny dipping at midnight. Unbeknownst to the swimmers, though, one wall of the pool featured portholes to the hotel bar.

The 1973 edition of The Neo-Fan's Guide contained directions on “What to do if you see a naked lady,” noting that it was “not an invitation.”

Although one of Rotsler's Rules says that “No costume is no costume,” all but complete nudity was common in masquerades in the 1960s through ’80s. One of the more interesting sidelights of Discon II in 1974 was a protest after the convention by Jon and Joni Stopa, Mike and Carol Resnick, Bob and Anne Passovoy, Ann Cass, Martha and Hank Beck and Jackie Franke that one or more of the judges at the masquerade discriminated against nudity in costumes. Several Westercon masquerades presented Most Naked Lady awards, until it became boring.

Fandom's only professional ecdysiast, Patia von Sternberg, famously entertained during the masquerade judging at MidAmeriCon in 1976. Patia stripped down to her g-string and pasties, to the tune of Joan Baez's rendition of "The Night They Drove Old Dixie Down." Then she tossed her brassiere at goh Robert A. Heinlein. The masquerade judges hadn't finished deliberating by then, so she went on dancing in the almost altogether for another 20 minutes.

Corinna Frank’s rules for the costume contest at Windycon III (1976), stated: “NUDITY must not be absolute.... Men must wear a minimum of a figleaf, ladies a minimum of two sequins and a cork. Please cover up bare bods when outside the con area.”