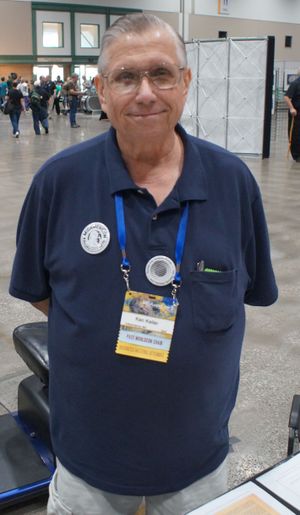 Ken Keller is a Kansas City, MO, conrunning fan who first found fandom in 1963. He was a co-founder of the Kansas City Science Fiction & Fantasy Society in 1971 and has served as a director. He chaired (and was toastmaster of) Mid-America Con in 1972 and chaired BYOB-Con 3 in 1973. He also chaired a number of KC regionals in the early- and mid-70s.

He chaired the successful KC in '76 bid and the resulting MidAmeriCon, the 1976 Worldcon. Innovations he instituted there were highly controversial. Some have become tradition, like a big jump in at-the-door membership fees. Others, such as an effort to rein in the Worldcon size by concentrating on core topics (vs. a Big Tent), did not last. (A lampooning filksong, “Gee Chairman Keller!” by Jeff Duntemann, was one of the reactions at the time.)