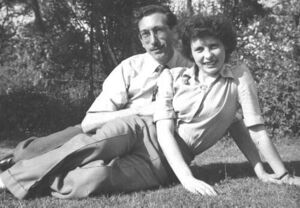 Pamela Kathleen “Pam” Bulmer (née Buckmaster) was a British fan active in the 1950s. She was on the Loncon committee and introduced Ella Parker to fanzines.

She was Ron Buckmaster’s sister and married fellow fan Kenneth Bulmer on March 7, 1953. In 1955, she accompanied Ken on his TAFF trip. The Clevention PR 4 described her:

The Bulmers had three children; they divorced in 1981.