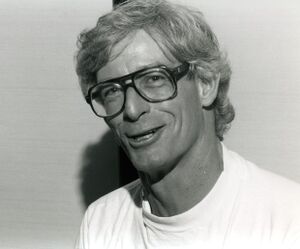 Ken Moore
Photo by and copyright Andrew I. Porter

Kenneth A. “Khen” Moore was an intrinsic member of Nashville fandom and an avid con fan. He founded Kubla Khan in Nashville and chaired it for around 30 years. He was past president and founding member of the Nashville Science Fiction Club. See Nashville, TN, for more of his fanhistory there.

He was an avid collector of SF art (his collection was exhibited at Renovation, the 2011 Worldcon) and presented the Frank R. Paul Award. He and his then-wife, Lou Moore, ran the art shows for Iguanacon (the 1978 Worldcon) and NorthAmericon (the 1979 NASFiC).

He co-chaired DeepSouthCon 24 in 1986 with Sue Francis, and chaired DeepSouthCon 33 in 1995 (and the Nashville in '95 bid which led to it). He was on the bid committee for the Louisville in '79 NASFiC bid (which started as a Ken-Moore-led Nashville in '79 hoax bid) and the L&N '94 Worldcon bid. ConCave was begun in part as an offshoot of an idea he had to make UpperSouthClave a traveling convention. He made a lot of Swill. 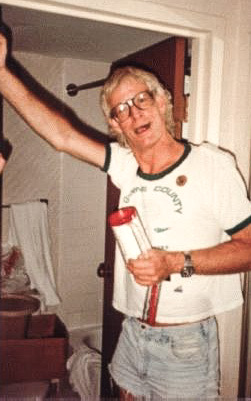 A tall, lanky blond, Khen was known for wearing very short denim cut-offs, and was almost never seen at fan gatherings in long pants. As his friend Naomi Fisher described him, “he was 6'4", skinny as a rail, beak-nosed and knobby-kneed, with glasses that made him look like a wild-eyed, crazily intelligent stork.”

In mundane life, Ken was an aviation engineer and pilot.