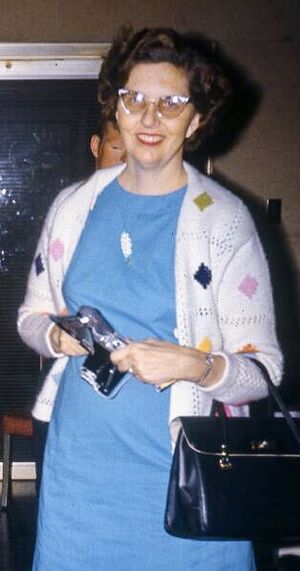 June and her husband Len Moffatt were TAFF winners in 1973. Dave Locke and Ed Cox published Unabashed Plug in support of their candidacy. Many of their offices, publications and accomplishments were joint.

She was a member of SCIFI, The Petards, the DREGS of L.A. Fandom, the Burroughs Bibliophiles, the Blustering Gales of the SW and the Curious Collectors of Baker St. She was one of the founders of Bouchercon and chaired three of them.

She was an associate member of the First Fandom club. She was also one of the last five members of CAPA, and contributed June's Notes.

June joined LASFS on August 19, 1948, after attending her first meeting in 1947 — with her birth mother, Louise Leipiar (sf writer L. Major Reynolds) — and later was an officer, including president, and contributor to Apa-L. Len Moffatt wrote in Shangri-L'Affaires 77 (October 1980, p. 9): 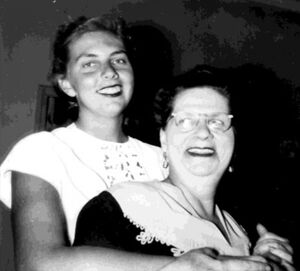 June Poulson with her birth mother, Louise Leipiar, ca. 1949. From the LASFS Album.

June was adopted soon after birth by Ben and Mabelle Poulson. She reconnected with Louise as an adult; the relationship was not a close one, according to June’s son Bob Konigsberg, but Louise did introduce June to LASFS. 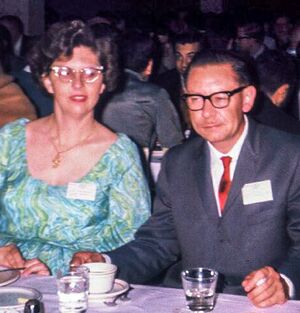