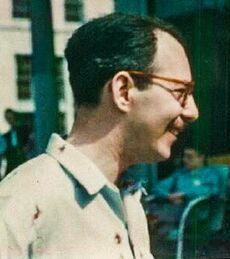 Ephraim A. Konigsberg, an LA fan active from the 1940s, was a member of LASFS. He reviewed books (Len Moffatt called him “one of our best book reviewers”) and co-edited one issue of Shangri L'Affaires in the early 1950s. Though most active in the 1940s and ’50s, he was on the program at L.A.con II, so he was still connected to fandom in the ’80s.

Eph was a very old friend. At one time he was a member of the Los Angeles Science Fantasy Society, but that was well before I knew him or about LASFS. I met him as part of a discussion group in the 1970’s when he was married to Josepha. We went to each others birthday parties, and I very much liked going to dinner with Eph at the Cal Tech Athenaeum of which he was a member. Eph owned and was chief scientist of an instrumentation company that did fabulous work on physiological instrumentation, including a pill that troops could swallow and thereafter broadcast their fundamental physiological data. He did all this in early days when Moore’s Law hadn’t made such work easier.

Eph was a very well read man, and our discussions ranged through human history. He was a scholar of Jewish early writing and history, and he liked to lecture even more than I do, but he was less inclined to inflict this on unwilling listeners. I was very much willing to listen to him....

A scholar, a local community activist, and a very good friend. I’ll miss him.

Philip K. Dick dedicated a novel, The World Jones Made (1956), to “Eph Konigsberg who talked fast and talked very well.”

Eph was born in Shanghai, China, in 1924 to Israel and Sarah Meyer Konigsberg. His first language was Yiddish. The family moved to the Philippines about 1927–28. At age 14, Eph camped out at the U.S. Embassy in Manila, insisting he wanted to be an American, and then immigrated to the States by himself. He earned bachelor’s and master’s degrees in mechanical engineering and eventually opened his own company, Konigsberg Instruments, which specialized in miniature medical implants. Eph died in California in 2011.