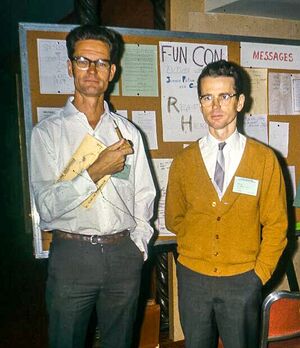 Jean Cox was an LA-area fan and pro active in conrunning, clubs and fanzines. He was on the committee for Pacificon, the 1946 Worldcon, and worked on numerous conventions afterward.

A member of LASFS, he served as an officer and edited several issues of Shangri L'Affaires. As director, he believed in Keeping Order during the formal club meetings.

He was a contributor to Science Fiction Times and to Riverside Quarterly, among other fanzines.

As a pro, he was honored with the LASFS annual Fanquet in 1950. He was awarded the 1952 LASFS Writer of the Year Award and regularly attended the Tom & Terri Pinckard Science Fiction Salon. His first published SF story, "Twilight Planet," appeared in F&SF in 1951. He also wrote as Ralph Carghill, Jean Cox, Gene Cross, William Dean and John Thames Rokesmith.

His younger brother, Bill Cox, was a LASFan, too.