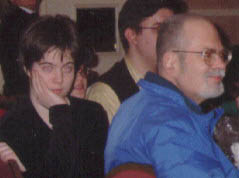 Leslie Mann and Monty Wells at the Saturday Dinner at Boskone, 1998

Back in the early '80s, Jim and I moved to Boston and became very active in NESFA and MCFI. One of the major tasks NESFA members undertook in those days was to look for a clubhouse. We looked at old houses and old storefronts all over the Boston area. (See Saga of the NESFA Clubhouse.)

One of the leaders of this search was a newcomer to NESFA named Monty Wells. Monty was a teacher at a local high school with a teenaged daughter. We soon discovered that among Monty's talents was that he knew everything -- and I mean everything -- about carpentry, building codes and how to decide if the building you're looking at is right for you.

Monty often got "first looks" at various buildings, since he was interested and really understood buildings. He could evaluate a building with an agent to figure out if it was worthwhile getting other folks in the club to look at it. I particularly remember a building that had been an old theater off Watertown that we went to see several times. Monty explained what was going on with the wiring, the floor boards, even the fire escape. I think Monty might have been looking forward to the challenge of turning an old theater into the Monty clubhouse. But we finally decided the theater wasn't quite right for us, so we went on with the search. 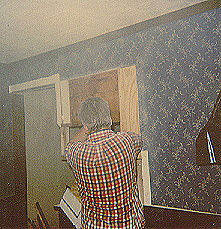 Monty Wells, hard at work, surrounded by dust as usual as he carefully removes part of the wall between our light and airy dining room and our cave-like kitchen, 1988

Finally, after years of prowling the classified ads of the Boston Globe, we found an old dry cleaner's in Somerville. The price was definitely right, but it did require an awful lot of work. Monty led us through the joys of ripping out floor-to-ceiling cleaning machines. Not to mention finding the 6' long piece of equipment that later had a life after the dry cleaners. Monty created a suitable resting place for the equipment that withstood quite a few adventures over the years...;->

Monty was very happy with tools, from the basic sledgehammer to the latest circular saw. He probably used every piece he owned and many he borrowed to help get the clubhouse habitable. He showed us how to rip down walls, put up new ones, level floors and put new flooring down.

Monty was not a traveling fan, but he did work on Boskones and Noreascons and Arisias. He worked with Chip Hitchcock to create the "tinkertoy" art show setup. He was often one of the first to load the logistics truck and one of the last to leave after it was all unloaded. 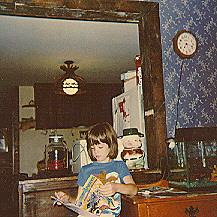 Leslie Mann (not Monty Wells) after we finished the post-wall demolition clean-up, 1988

In addition to all his work for the club, you could always get Monty to help out with other projects. Many of us bought houses back in the '80s, and Monty's expertise helped all of us. The fact that I'd followed him on a dozen house tours before we started looking for a house on our own meant I knew what questions to ask and why a solid steel main beam was such a good thing to have. You could also hire Monty to do summertime renovations; he turned our cave-like kitchen a bit lighter by knocking down some of the wall between the dining room and the kitchen (these before and after photos were taken in the summer of 1988). The last thing he did for us was to rebuild our dining room steps before we moved to Pittsburgh.

We haven't seen Monty too much over the last few years, other than our annual trip up to Boskone. We had heard from friends that he'd developed cancer, so when we saw him at this year's Boskone, he was gaunt and tired. But his mind was still quite lively, and it was a real pleasure to see him again.