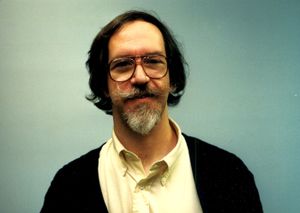 Chip (Charles J.) Hitchcock is a con-running fan living in the Boston area. He is a member of NESFA and MCFI and has worked on a great many conventions including Worldcons at the Division Head level, Boskones and numerous other regionals.

He chaired Bosklone, Lexicon 7 and Boskone 24 and co-chaired the 25th World Fantasy Convention. He has been an officer of both NESFA and MCFI and was made a Fellow of NESFA in 1979.

He has participated in the SCA for many years and also has committed amateur theatrics in such fannish plays as The Decomposers and Back to Rivets.

He is married to fellow fan Davey Snyder.