Saga of the NESFA Clubhouse 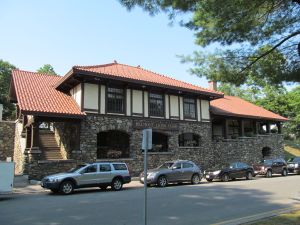 I suspect that the idea of NESFA owning a clubhouse was first seriously considered after Noreascon Two rented office space for three months in 1980 on the second floor of a storefront in Watertown Square. The convenience of having space to store things and to meet in without invading members' houses was liberating. But in those days, NESFA didn't have the money to buy a building, and so continued to meet in a rented hall at the Belmont Lion's Club (every month except December when they sold Christmas trees!)

As Boskone grew in the early 80s (see Rise and Fall of the Giant Boskones for much more on this), it stressed the club, but it also generated a moderate amount of cash and, by 1984, NESFA was seriously looking for a building. A Clubhouse Search Committee was formed and most of the membership started looking at vacant buildings with envious eyes. From the start, NESFA decided it needed a couple of thousand square feet which would be at least moderately accessible to public transit.

The first building seriously considered was an abandoned theater on Galen St. just over the Charles River from Watertown Square. The location was super, and the building was huge, with a basement full of rooms and the enormous theater space on the first floor. (There was a tenant using the warren of rooms in the basement; Monty Wells, a high school chemistry teacher, recognized it as a small production company which made science films he'd used.) We toured the building with a realtor and concluded that it was a possibility — the biggest piece of interior work would be to build a level floor over the sloping theater section. The price was even (barely) within our reach. Alas, close examination showed that the building needed an immediate major roof repair, and that pushed it up out of our range (though less than what we ultimately paid for the clubhouse we wound up buying.) As it turned out, everyone else seems to have come to the same conclusion — about a year later, still unsold, it was torn down and the lot sold.

During this time NESFA repeatedly considered the notion of buying an ordinary house and converting it to a clubhouse, even to the point once of getting a tour en masse of one in Waltham. One point raised in its favor was that we could have a caretaker by letting an unemployed fan rent part of it in exchange for maintenance. Ultimately, this idea failed, probably because no one thought that a clubhouse would fit in well in a residential neighborhood.

The next near-miss was at the start of 1985. A very nice two-story brick building on Rt 20 a mile or so west of Watertown Square had come up for sale. It was a bit more expensive than we could afford, but it had a tenant on the ground floor. Keeping the tenant made it possible for us to afford the building which, perhaps, we could later grow into using (and affording) the whole building. This one was discovered just before Boskone, and the Building Committee proudly had pictures of it posted in Boskone Services for the membership to look at. At the Business Meeting following Boskone, NESFA authorized the President to make an offer on the building. The offer wasn't accepted with the explanation that several people had inherited shares in the building, and surely we wouldn't mind waiting while the owners are polled.... A few weeks later, we were informed that the tenant had purchased the building for a good deal more than we'd offered. It appears that our offer was merely used as a lever to get more money out of the tenant. 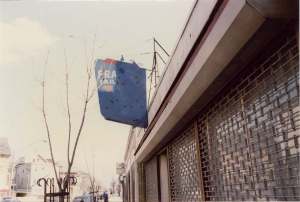 About six months later, Rich Ferree discovered a storefront in Somerville which had been a men's clothing store / tailor shop / dry cleaning shop which was for sale by the estate of the proprietor at a very reasonable price. It was a mess inside, but we'd already resigned ourselves to a fixer-upper, so we made an offer ($160,000) and a few weeks later were the proud owners of a clubhouse...or, rather, a building which might with a lot of work become a clubhouse.

A big chunk of the purchase price came from money raised by the NESFA Lunar Realty Trust #1, a trust organized under Massachusetts law which collected around $60,000 towards the purchase price. The NLRT#1 sold bonds worth $100 each and paid interest based on the prime rate. Most of the money was raised locally, but S.C.I.F.I., the organization which had just run the huge and financially quite successful LAcon II, purchased $20,000 worth of NLRT#1 bonds. (It's worth noting that they paid for it with 100 checks for $137 — it's a long story, see SCIFI and 1.37 — plus one more check for $6300.) The NLRT#1 bonds were paid off completely over the next two and a half years. 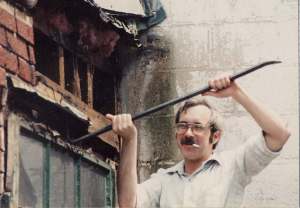 While dismantling the huge dryer for removal, we discovered about a quart of stuff in the bottom: coins, jewelry, marbles, and other pocket stuff. The coins were the biggest portion and amounted to a decent haul. (Of course, it took three people several hours to fish them all out and clean them up...)

Another find of considerable value was a power shaft for the washer which was perhaps 6' long with lovely ball-bearing axles and a 2' diameter toothed gear on one end. As it was dismantled, people though it was much too lovely to waste — but what to do with it? Inspiration struck: Send it to LASFS! Don Eastlake quickly organized a carpentry crew and built a shipping crate which features heavy-duty construction and special mounting brackets which allowed the shaft to spin freely within the crate. The finished crate was closed, screwed shut, and The Shaft was put on a truck for delivery to LASFS. Since there was some doubt that LASFS would accept delivery of a huge sealed crate from NESFA, arrangements were made to have a secret agent on site to handle that chore for them...

The reconstruction of the clubhouse was led by the late Monty Wells, a high school chemistry teacher with an enormous store of practical knowledge of all aspects of building and tearing down. Probably twenty NESFAns worked on the project, but the indefatigable Monty led us all.

It didn't take long to realize that the fixing-up was a bigger job than we'd anticipated. The first discovery was that the previous owner — who'd owned the building for a long time — had had a very odd way of doing improvements. Whenever he thought the building was looking shabby, he'd just put new walls and ceilings in right over the old. So there were layers of painted wall, and paneling of various styles, and plastered wall, and gypsum board, and acoustic tile on the ceiling. All one on top of the other, getting to be 3 inches thick in most places. We tore it out. It was filthy. We became filthy. We'd go home after a day of dismantling and take a shower and clean up to the point that a second shower had a chance of getting us clean. 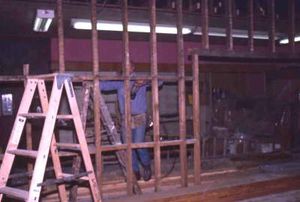 As we excavated, we decided that the floor needed replacing, also, so we stripped that down (it too had multiple layers) and resurfaced it. Once we had new underlayment down, we started putting down floor tiles. A couple of professional tilers were walking by, looked in and saw us struggling. They came in, said "no — do it like this!" showing us a much simpler and more efficient way of putting down the mastic, and walked on.

One wall turned out to be a lovely interior brick wall which when cleaned up looked great — and was half as thick as when we bought it. (One of the more amusing projects was when we decide to cut a door in the brick wall. Monty rented a brick cutter, we rigged up an airlock-like affair to keep the dust under control, and a couple of hours later, he emerged red from head to toe except for pale rings around his eyes where the safety glasses were. (And fifteen years later we still found little caches of red dust in the area...)

Much of this work we did ourselves, but several of the projects required professional help. Monty had friends in the business, so we hired them to supervise us for some parts and to do other parts. The electricity, the plumbing, and replacing a load-bearing interior wall with a metal-reinforced beam were all done under professional supervision.

It took about a year, but eventually we were done. We had a clubhouse — and many of us had a solid education in home improvements.

We occupied the clubhouse once we had it basically habitable: power, heating, toilets, walls and floor. And we continued to work. One major project was to line the walls of the main room with bookshelves so the NESFA Library finally had a permanent home. (Naturally, it immediately started growing rapidly, so it has existed almost permanently in a state of overcrowding. It's presently about 9000 books.) 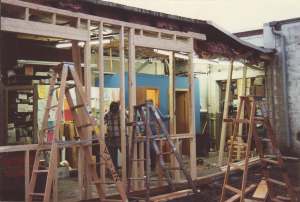 Later projects included replacing the back wall — we tore the old wall with its rotted foundation out, poured a proper foundation and then left the roof propped up by poles until the concrete could dry. The next day it was raining, but we had to finish. Lotsa fun! And, finally, when we got tired of the leaks, we put a new roof on it — that one we left to the professionals.