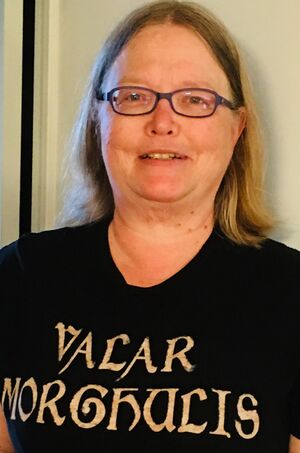 She's been in SF fandom since 1974, and is a con-running fan — she started working on cons in 1975. She's run cons of all sizes, from small Chococon, 1994, 14 people, Lexicon, 1985, about 50 people (con guide (IA)), chaired Smofcon 30, co-chaired Smofcon 25 and co-chaired Boskone 25. She worked on many Worldcons and all sizes of cons in between, most frequently Boskone and Confluence. She was the Program division head for Sasquan, a job she also held (with her husband, Jim Mann) for Millennium Philcon, and was an assistant Program division head for Renovation. She was the first editor of Mad 3 Party and helped organize FanHistoriCon 8. She has been a member of NESFA, MCFI, FANAC, and PARSEC. On the darker side, at Nolacon II, she was responsible for the tradition that the upcoming Worldcon host the Hugo Losers Party when that tradition was about to die out.

She started the first SF award Website in 1994 Awardweb (IA), a listing of science fiction award nominees and winners. She created one of the first Websites for a convention, for the New Orleans World Fantasy Con in 1994. Laurie also ran Dead People Server (IA), a database of celebrity death information from March 1997 to January 2017 (which later became a Facebook group (IA)).

She has been married to fellow fan Jim Mann since 1977; they have one fanspring, Leslie. Personal Website.