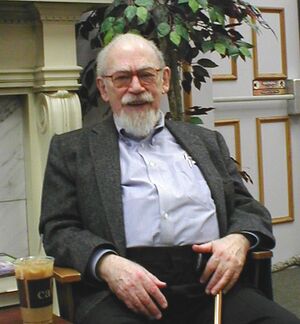 William Tenn is the pen name of London-born Philip Klass who moved to the US as a child. He began writing in 1945 after being discharged from the Army, and his first story, "Alexander the Bait," was published a year later. His stories and articles have been widely anthologized, a number of them in best-of-the-year collections. He was married to Fruma Klass for many years; they had a daughter Adina.

He was a professor of English at the Pennsylvania State University in State College, where he taught — among other things — a popular course in science fiction. One of his students was David Morrell, who dedicated his first Rambo novel "First Blood" to him.

He retired to Pittsburgh, PA and was a regular Confluence attendee.

He attended the Nebulas at least twice - once as Author Emeritus at the 1999 Nebula Awards Weekend in Pittsburgh, and again as a speaker at the 2003 Nebula Awards Weekend in Philadelphia. Here's a group picture of the speakers and winners from 2003. He was able to renew acquaintances with old friends like Harry Harrison (to his right) and Katherine MacLean (white jacket, top row) and meet Neil Gaiman.