(Did you mean the Portland Science-Fantasy Society?)

PSFS, the Philadelphia Science Fiction Society, is one of the oldest SF clubs in existence. It was organized by Milton Rothman and four other fans in December 1934 as chapter 11 of the Science Fiction League (later called the PSFL) and has remained alive more-or-less continuously since. (PSFS celebrates October 5, 1935 as its first meeting because prior to that date meetings had been sporadic, but afterward, meetings were continuous, except for a period during World War II.) At nearly the same time, the Boy's Science Fiction Club had been formed. The two clubs became aware of each other and when the SFL disintegrated, they coalesced, forming PSFS. 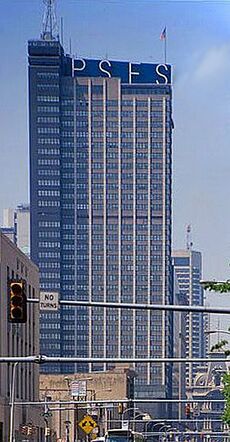 During the War, activity diminished until in 1942 the club went dormant with only Ossie Train left in Philadelphia among the membership. He continued active and published the PSFS News, but it wasn't until the fall of 1943 (or possibly 1944) when the Philadelphia Futurians merged into PSFS, that it had plural members again. (See a letter by Harry Warner, Jr. in File 770 13, p. 7)

By 1945, the club had at least one Black member, according to Sam Moskowitz in The Immortal Storm.

One of the droller bits of PSFS lore is based on the Philadelphia Savings Fund Society, a major local bank which had a skyscraper in downtown with a big, red, glowing "PSFS" at the top on each side at night. PSFans would point it out as their clubhouse...

PSFS is the sponsor of Philcon.