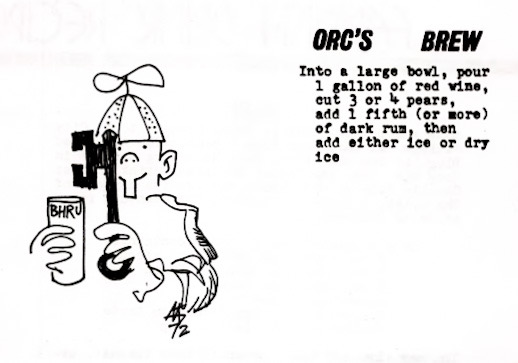 From the Philcon 1972 program book. Art by Alexis Gilliland.

Popular fannish libations have included Beam's Choice, Blog, the Nuclear Fizz, the Spayed Gerbil, the Super Science Fiction Special and Swill. White mule (moonshine) was the drink of Southern fandom in the 1950s, although swamp water was favored in Savannah. A newer fictional favorite, the Pan Galactic Gargle Blaster, can’t be made from Terran ingredients, but many have tried.

One source of recipes was Poul and Karen Anderson’s The No Holds Barred Guide (1954). The Philcon 1972 program book includes directions for versions of Blog, Nuclear Fizz, Swill and Orc's Brew, a concoction of red wine, dark rum and pears over ice.

Margil (no H in the original) and vuzd were, along with rum, ingredients in a Martian cocktail called a Three Planets, the correct mixing thereof is essential to the plot of “Q. U. R.,” a story by H. H. Holmes (aka Anthony Boucher) appearing in the March 1943 issue of Astounding. A Three Planets must be drunk within thirty seconds of mixing for the first sip to have its ideal flavor.

Joy Clarke made the rhubarb wine.

In Jim Caughran’s 1958 Illwiscon conrep (online here), he reported drinking Vaca Morados in Dean Grennell’s basement after the con. The name means “purple cow” in Spanish. Queried in 2020, Caughran could not recall the ingredients.