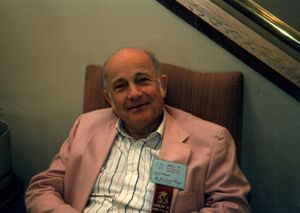 A fan, fan artist and sf writer living in the Washington, DC area who was a member of WSFA, which he heard about in connection with Discon II, the 1963 Worldcon in Washington. He and his first wife (Dolly Gilliland) hosted WSFA monthly meetings in their home from 1967 through her death in 1991, and Gilliland continued to host them until 2006. He married Lee Gilliland in 1993.

Gilliland is particularly known for his witty cartoons.

He wrote the fannish play "Star Wars' Roots" which was performed at Disclave 22. He ran for DUFF in 1983. He chaired Disclave 19 and Disclave 25. Fanzines include Das Fangold and a stint as editor of the WSFA Journal. He was in Smoflahoma.

Gilliland also published two trilogies (Rosinante and Wizenbeak) and the stand-alone novel The End of the Empire as well as several short stories.