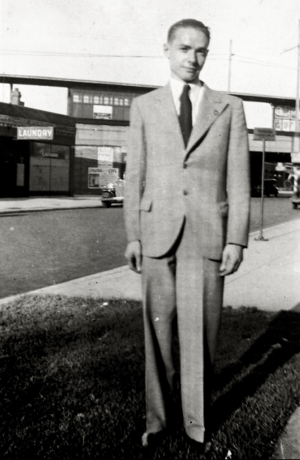 Jack Darrow was a fannish pseudonym adopted by Clifford Kornoelje. He was active in the Chicago SFL in the 1930s. Bob Madle described him as "one of the period's two most prolific letter writers" and Sam Moskowitz as a "prominent example of readers who won their fame in the letter columns."

Darrow wrote for various fanzines, including the CSFL's clubzine, The Fourteen Leaflet. Along with Otto Binder and William Dellenback, he traveled to New York in June 1935 to meet members of the New York chapter of the Science Fiction League, but arrived a day after the meeting on June 29, touring the city with Charles D. Hornig, Mort Weissinger, and Julius Schwartz. He returned to New York four years later to attend the first Worldcon.

Darrow served as assistant director for the re-formed Chicago SFL (known as the Chicago Science Fictioneers) in 1939 in William Hamling's attempt to run Chicon I, but the con was run by the Illini Fantasy Fictioneers instead.

He was mentioned in Terry Carr's satire "Egoboo for Algernon" (Ragnarok 8, January 1961). Eando Binder's novel The Mind from Out Space is dedicated to Kornoelje, referring to him as the authors' first fan.