Boxboro Fandom (which actually had members in Boxboro, MA) was a completely informal group of fans who threw cleverly themed room parties at Boskones in the 1980s.

They eventually decided to retire with a blowout party, Louis Wu's Birthday Party, at Noreascon 3, the 1989 Boston Worldcon, as Steve Boheim describes below. (Louis Gridley Wu is a character in Larry Niven’s Ringworld series.)

by Steve Boheim for the Noreascon Three Program Book 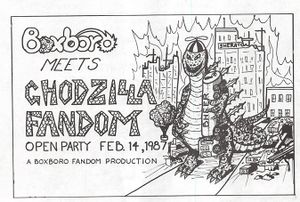 It's Noreascon Three, the Sheraton Towers, Sunday night to be exact, and Joe Phan has just walked through a crowded graveyard, knee deep in mist, past the last resting places of such notables as Claude Degler and Ray Kroc, got carded at a nearby bar and obtained a potent brew, and now finds himself singing "Isn't It Grand Boys?" in front of a giant video screen and bidding against Larry Niven for a 6' Puppeteer. The walls in this room, unlike the graveyard, are filled with bric-a-brac from Joe's past:

Joe Phan's thoughts drift back to a conversation in 1979 with Mark Norton, about the paucity of good parties at Boskone. Mark decides to gather some friends together and throw a quality open party -- music crepe paper, bheer (or beer, if you insist), a room or two, and voila -- a "Boxboro Fandom party." OK, but something is missing -- audience participation! -- a theme is needed!--and therein lies the sordid tale.

The theme idea was successful. "Boxboro and Environs," at Noreascon Two, was the first theme party. It was a gag Worldcon bid party. The word got out, and attendance grew. Over the years, the small Boskone party became a big Boskone party as Mark and his friends tried to outdo the previous year's effort. Nothing was sacred to their theme-ish wrath -- social commentary on weapon policies in "Revenge of Boxboro Fandom," spoofed franchises in "Boxboro McFandom: Over 3,000 Served," Fractured Verne and Disney in "20,000 Leagues Under Boxboro Fandom" (you may have read about this in Locus, April 1985, page 25), Indy II done the "right" way in "In Search of the Lost Temple of Boxboro Fandom," and a salute to all of those Japanese films in "Boxboro meets Ghodzilla Fandom." Year after year, the Boxboro folks came up with a memorable [theme]. Boskone down scaled and moved to Springfield. In Springfield, Joe Phan had overheard a secret meeting of the Boxboro folks. All of this party hosting took much time and effort, and they were planning to end it all!! They planned to throw one big blow-out party, a memorable event of absurd proportions, in 1989, ten years after the whole thing got started. Something with champagne waterfalls, live music, and decorations galore!!

Joe learned that Mark and company (Brigid Cassidy, Anne Norton, Paul Norton, Steve Koon, and Steve Boheim) had started plotting and scheming for this blow-out party in 1983, even saving money (saving $1 each time they got together to play pinochle). When the Noreascon Three bid started up, they had their target convention. After the bid was awarded, the fund raising started in earnest. They sold buttons, videotapes, tee-shirts, club offices, party bric-a-brac, just about anything they could to raise money for the big event. They chose a theme which allowed multiple rooms decorated differently -- Louis Wu's birthday odyssey! Even Larry Niven approved it. They polled most of the SF and fantasy clubs in the country, asking for their ideas and support. They badgered and solicited fans and pros to help plan, decorate, and throw the big "do." They convinced the Noreascon Three committee to call this party an "Extravaganza" Event (in the same company as the Hugo Ceremony and the Masquerade).

They had lost their minds.

Cut to Noreascon Three, Friday night, 10 p.m. Joe Phan has been standing in line in front of the Back Bay Hilton for half an hour, waiting to get into "Boxboro Fandom presents: Louis Wu's Birthday Party." He finally enters, overhearing the Hilton security folks mumbling about fire codes and overcrowding, and walks into:

A cyberpunk Tokyo street scene, complete with Kanji, trash and rats, a Sushi street vendor, a cyberpunker selling drugs, and a live laser show overhead. In the nearby Mirrorshades Cafe, a wall of video plays solarized scenes, video games and music blare, oriental and futuristic slides stun the eyes, and glitter, chrome, and trash abound. Colored pills, munchies, egg rolls, and spare ribs are complemented by soda and a cyberpunk bar (glitter purple and chrome) complete with band (Crime of Fashion). Molly chats about life, and the computer terminal is hounded by crazed hackers talking to electronic guests.

Joe Phan wanders through a transport booth into a Puppeteer garden, loaded with alien plants (complete with botanical descriptions), and is delighted to find soda, fruits, and vegetables for the hungry guest, and a Puppeteer hiding in the purple and orange trees.

Next through the portals into -- New Orleans Mardi Gras, complete with harlequin, the Dark and White Kings of Carnival, a live jazz band (The Hi-Tops), a parade with throws, a masked ball, hundreds of masks and beads, balloons, a bar, cheeses, vegetables, munchies, and a surprise visit by Edgar Winter.

Joe next heads for the Kzinti Embassy, fights his way past the pickets, and passes through the lava caves into a fur-lined room, with huge weapons on display and red meat available (roast beef served by a chef wearing a propeller beanie). Joe encounters fen playing a Ringworld crossword puzzle, and gets himself photographed with his favorite alien.

Joe next finds the Tea Party Room, where he feasts on finger sandwiches, cakes (including a Ghodzilla sheet cake), and tea, sings unbirthday songs, and plays croquet with flamingo mallets. On to the Map Room, where videos show the size of the Ringworld and bloopers from Star Trek: The Next Generation. Joe inhales the vegetables, munchies, etc., and plays a trivia game hosted by Louis Wu and Teela Brown.

Joe ends up helping to tear down after things close at 2 a.m. (Joe learns that he is one of 1400 fen who helped Louis Wu celebrate his birthday in grand style). Joe particularly liked using the chain saw to dismantle the lava walls (the convention committee said it was OK--chain saws are not a weapon, unless used with a hockey mask!).

Joe's thoughts return to the present -- the Boxboro hosts are all wearing "Just Say No" tee-shirts, swearing that this is their last party. The bheer and liquor eventually run out, but nobody seems to care. Joe glances at his watch, and grins -- The Baaad Beatles Songfest (an annual event at the Boxboro parties) will start soon (3 a.m.ish) and no doubt will run until dawn (it did). Joe decides to help out the guy at the door who is handing out skull stickers--800 guests and counting.

Boxboro Fandom has served over 12,000 fen in a decade of theme parties; THANK YOU to all for your help and support. We owe so many of you special thanks for helping us plan, finance, and throw the various parties that a list here is not practical. We feel that there are several essential acknowledgments -- Hoboken Fandom (Lance Larsen, Hans Kernast, Shira Daemon, Scott Fader, Den Fox, Chris Ward, Mike Nelson, Kitty Kitik, and Nancy Ziegler), who consistently helped out when we consistently overextended ourselves -- the long-suffering spouse/fiancee squad (Angela Boheim, Elda DiLorenzo, Tom DeMarco, and Cyndi Norton) -- Marsha Hamel, Jim Hudson, and Lee Winter for a decade of support--and the organizations who helped fund the Louis Wu party (Massachusetts Convention Fandom, Inc., The New York Science Fiction Society-the Lunarians, The New England Science Fiction Association, Baen Books, The Philadelphia Science Fiction Society, The Silent Club, and Solar). We had fun, and hope you did too.