A hoax bid launched by Neil Rest, Joni Stopa and others at L.A.Con II for the 1988 Worldcon, which morphed into a semi-serious bid. The Bermuda Triangle Bid is also referred to as The Boat or The Boat Bid. It would set out from Miami on the S.S. Norway cruise ship for a week's wandering of the Caribbean. It was sponsored by the 49th Ward Regular Science Fiction Organization, Inc., which had been created for the purpose.

Many fans found the hoax amusing enough to work out details of the proposed Worldcon: ship, itinerary, costs, etc., and to produce bid literature, ads and fun bid parties. More than a few voters believed it to be real, and ultimately, it became so, complete with filing.

The ship, the S.S. Norway, had 875 cabins and so would be limited to 1,864 passengers, max. The cruise line wanted $1,800,000 to rent the entire ship, so for a full house, the average fare would have been $1,028, though the committee floated a number of $800. (Air fare to Miami would have been extra.) The going rate for a double room then was about $75, so this would have been about quadruple the usual rate. In compensation, it did include meals.

Athough L.A.con II had had some 8,300 attendees, which is what inspired Rest’s idea of a limited attendance Worldcon, at the time, many fans concluded that there simply weren't 1,750 fans who would pay the price of a full ship, so that the convention would be trapped in a vicious cycle of membership shortfalls increasing the price per room which would further decrease membership.

The support the bid received as Rest was thinking about it caused John Guidry to launch his own Worldcon bid for New Orleans the same night.

Nolacon II, which also held amazing bid parties, won the vote with the Bermuda Triangle coming in second in a field of four. (This was as much a measure how lackluster the bids were that year as anything else.) By the end of the con where voting was conducted, Rest was begging people to vote against the Bermuda Triangle. See 1988 Worldcon Site Selection for details.

As served at bid parties, per Neil Rest: 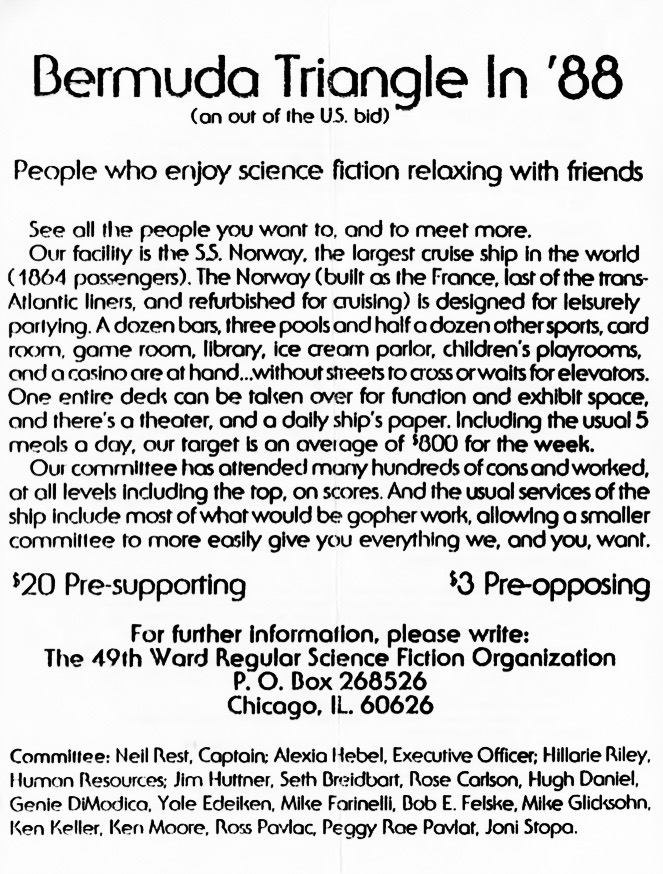