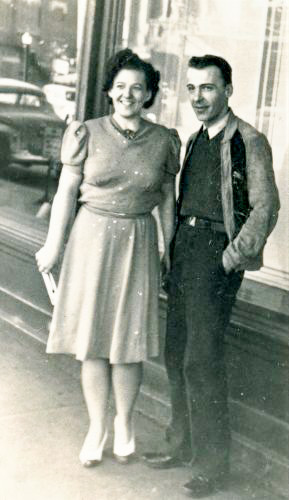 Abby Lu Ashley (née Abby Lucretia Bartholomew) was famed as the doyenne of the original Slan Shack, a houseful of fen in Battle Creek, Michigan, from 1943–45. She and Al Ashley, her second husband, were the householders. 4E gave her the Esperanto nickname Ruĵa-Blu (see below).

The group called themselves the “Galactic Roomers,” a pun on Galactic Roamers, the local club they all belonged to.

Abby Lu attended the 1941 Michiconference (Photos) and the 1942 Bloomington Conference; the 1943–45 Michiconferences were held at her home. After that, she and her husband, her daughter, Toople, and the rest of the Slan Shackers moved to LA and joined LASFS.

Things got pretty cozy in the Slan Shack, according to Bob Tucker in Sci-Fic Variety 6 (June 1942):

The Ashleys’ FAPAzine was En Garde and Abby Lu contributed to Nova. She was a member of the N3F.

Born Abby Lucretia Bartholomew in Tennessee, she married Wayne Adams in 1927 in Michigan; they had two children (Darlyne, aka “Toople,” and Milton), and divorced in 1936. While Abby Lu got custody of both children, Milton later went to live with his father.

Abby Lu married Al Ashley in 1936 in Indiana. The move to Shangri-LA didn’t work out for them. Al moved back to Battle Creek, and by the late 1940s or early 1950s, she had divorced him, gafiated and married Joseph Skinner in 1953 in California, then Charles Fuller in 1960, also in California. Abby Lu died in California sometime in August 1985.